This Saturday is Nascar Night at New Smyrna Speedway. Come dressed as your
favorite Nascar driver and get in for $10 plus there will be bike races for
the kids so all kids need to bring their bikes and be sure to bring a helmet
so you can race. The scheduled NASCAR Whelan All-American Racing Series
action will feature the Pro Late Models, E-Modifieds, Mini Stocks, Super
Stocks and Strictly Stocks.
Rich Clouser has won three of the last four Pro Late Model races but is not in
the running for the PLM championship right now as that is a great two-way
battle between rookie drivers Will Carroll and Ricky Anderson. Carroll has
won twice but leads Anderson by just four points heading into this week’s
action. Anderson is one of several top drivers still looking for their first
win in the Pro Lates.
Eight-time winner Jarrett Korpi leads the E-Modified standings by 32 points
over Matthew Green who scored his second victory of the year last week when
the apparent winner was DQ’d in tech. Pat Wells has a slim nine point
advantage over David Russell in the Mini Stocks while Shannon Kelly is looking
at a second consecutive Super Stock title, now holding a decent 24 point lead
over Mike Amato. Jimmy Barron has a huge 40 point lead over Charles King in
the Strictly Stocks but everyone has taken a back seat the past couple of
weeks to the very fast Saturn of Palm Bay’s Zachary Curtis.
Pit gates open at 4 pm with division practice scheduled from 5-6:45 pm.
Grandstand gates open at 6 pm with racing at 7:30 pm starting with eight-lap
heat races for the Super Stocks, Mini Stocks, E-Modifieds and Strictly Stocks.
Intermission will feature the bike races for the kids then, following
intermission, 25-lap features are slated for the Super Stocks, Mini Stocks,
E-Modifieds and Pro Late Models ending with a 20-lap event for the Strictly
Stocks to close out the night of racing.
Adult admission is $15 with all seniors (65+) and active military personnel
with ID admitted for $13. But if you come dressed as your favorite NASCAR
driver, you’ll be admitted to the grandstands for just ten bucks! All kids 11
and under are free of charge.

LET’S SEE IF ANYBODY OUT THERE CAN BEAT THIS SATURN OF ZACHARY CURTIS - ANY TAKERS? 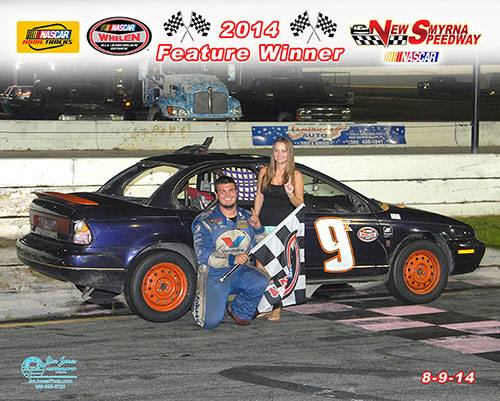 Its not that hard for him to win. when they only have about 3 cars average showing up and last I heard they don’t tech the strictly stocks anymore.

Clearly you have been lately. There has been a increasing feild the last couple weks. The 12 car Gave him a good run for his money two weeks back but had some mechanical problems last week. I’m pretty sure he’ll be back this week this week to try and bust his @$$

No I haven’t been out lately but I do read the results.