It seems like just yesterday that the Florida Governor’s Cup race concluded at
New Smyrna Speedway, but the 2015 racing season is already upon us as the
famed high-banked half-mile returns to action this Saturday night with the Red
Eye 100 for the Super Late Models and the Zack Donatti Memorial 50-lap event
for the Pro Late Models. Super Stocks and Strictly Stocks are also on the
racing menu Saturday night.
The Red Eye 100 has, for the most part, been contested as the first race of
the new calendar year at New Smyrna. The first Red Eye was held in 1984 and
the race has actually been run twice on New Years Eve and twice on New Years
night back when track owner Clyde Hart operated the speedway “52 weeks a
year.” New Smyrna racer Jack “Punky” Cook won the first Red Eye in '84 and
added three more victories in the race before he retired from competition.
A top field of drivers have already indicated they’ll be making the Red Eye
100 their first start of 2015 including defending race winner Travis Cope of
Weeki Wachee who is coming off his impressive win in the Florida Governor’s
Cup race back in November. Daniel Keene, Jr., who also hails from Weeki
Wachee, will be looking for his first win in the event which his father won
back in 1986.
Also entered are Pinellas Park’s Stephen Nasse, the 2011 and 2013 victor, 1988
and 2001 winner David Rogers of Orlando and 2010 champion Rich Clouser of
Deland.
Several out of state drivers are expected including Bubba Pollard of Senoia,
GA, Derrick Griffin of Indianapolis, IN, Matt Craig of Kannapolis, NC and
Charlotte, NC driver William Byron who will be wheeling a machine for Jeff
Fultz Racing.
Sarasota, FL driver Anthony Campi will be back behind the wheel after a bit of
a hiatus. His Pro Late Model car was driven to the 2014 New Smyrna Pro Late
Model title by Australian Will Carroll. Other expected Florida-based entrants
include Anthony Sergi of Geneva, Joe Boyd of Riverview, Lake Mary’s Bobby
Good, Anthony Cataldi of Umatilla and several more.
The Pro Late Models return to action with the Zack Donatti Memorial, slated
for 50 laps. The race will honor the memory of the young driver from New
Smyrna who lost his life on June 14 last year in a fall at a construction
site. Donatti was an accomplished race driver at an early age winning Quarter
Midget championships both at Little New Smyrna Speedway and on a national
level. He then moved on to the Late Model ranks at New Smyrna earning a track
title as well but at the age of 17 stopped racing because he did not want his
family to have to fund the team out of their own pocket. He then turned his
attention to the family construction business but never lost the dream of
racing again. He became a mentor to young aspiring drivers both on the big
track and at the Quarter Midget track. Zack was also a successful barrel
racer achieving state and national awards.
In his memory, fellow racer Shyanne Mathers has put up $500 to the driver
leading on lap nine in honor of Zack’s number that he ran on his cars - 9z.
Also, it has just been announced that extra money is being put up by the ZDR
Racing Foundation. The money will be on the line to the fast qualifier if
he/she starts last in the race and wins. If the fast qualifier declines the
offer to start at the rear of the field, the offer will go next to the driver
qualifying second-quick and through the top five in time trials to get a
taker. If 15 or more cars are in the field, $1,000 will be up for grabs to
the top-qualifying driver who elects to start from the rear of the field. If
there are 14 cars or less, the amount up for grabs will be an extra $500.
Pit gates open Saturday afternoon at 1 pm with Super Late Model practice from
3-4 pm. Pro Late Model, Super Stocks and Strictly Stocks will practice from
4-5:15 pm. Grandstand gates will open at 5 pm but fans are welcome come out
early and watch practice. Super Late Model qualifying will take place at 5:30
pm followed by Pro Late Model qualifying with racing getting under way at 7:30
pm.
Super Stocks will be up first for a 25-lap feature followed by the 50-lap Zack
Donatti Memorial for the Pro Late Models. Following intermission it’s the Red
Eye 100 for the Super Late Models with the evening being capped off by a
20-lap contest for the Strictly Stocks.
Adult admission is $20 with all seniors (65+) and military with valid ID
admitted for $18. Kids 11 and under are free of charge. Although the weather
is supposed to be spectacular with partly cloudy skies and temperatures near
80 degrees, the track has posted a rain date of 2 pm on Sunday if necessary. 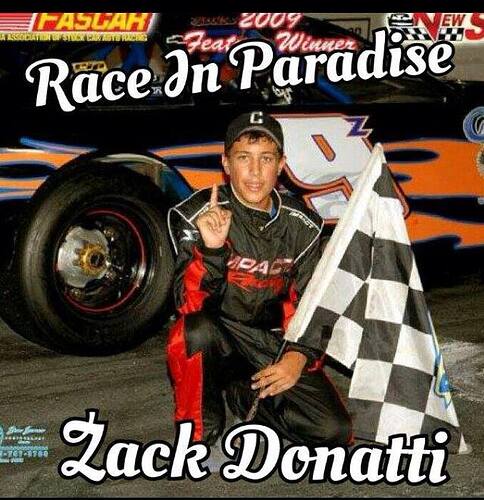