It will be “mom’s night out” in honor of Mother’s Day this Saturday night as
all moms will be admitted free of charge for week nine of the NASCAR Whelen
All-American Racing Series at New Smyrna Speedway. On-track action will
feature the Pro Late Models, Sunshine Seamless Gutters Mini Stocks, Super
Stocks and Bombers.
Four different drivers have taken the checker first in Pro Late Model
competition but three of them won in their only appearance of the year (so
far) including Ray Black, Jr., Michael Lira and Brad May. Black will
certainly not be here this week as he’s competing with the NASCAR Camping
World Truck Series at Kansas Speedway. One driver who will be in action is
Deland’s Rich Clouser who won the first race of the year for the Pro Lates and
currently leads the PLM point standings by seven markers over New Smyrna’s
Zach Jarrell. Blaise Hetznecker is third in points, ten back of Clouser with
Noah Cornman fourth, 12 behind the leader. All four drivers have not missed
an event so far this year.
Two drivers will be going for their fourth straight wins and will be trying to
remain unbeaten in their respective classes.
Justin Reynolds has opened the year by winning the first trio of Super Stock
features and the Merritt Island chauffeur has opened up a nine point advantage
over defending champion Shannon Kelly. Preston Hunt is currently third in
Super Stock points, 13 behind Reynolds.
Meanwhile, “Mr. Mini Stock,” Ted Vulpius of Mims, will also be trying to make
it four straight victories to open the year in the “four-banger” class
sponsored by Sunshine Seamless Gutters of DeBary. Brad Blanton of Tavares has
finished second to Vulpius each time out so far this season so is a relatively
close eight points behind Vulpius in the standings while David Russell sits in
third, 18 points behind the leader.
Shane Sutorus of Orlando has opened up a comfortable 28 point margin in the
Bomber points over Melbourne’s James Skinner headed into this week’s action
although newcomer Billy Barrington of Sanford picked up his first career
feature win last week and looks to have a car to be reckoned with the
remainder of the year.
Pit gates open Saturday afternoon at 3:30 pm with open practice slated from
5-6:30 pm. Grandstand gates open at 6 pm and early arrivals can visit the
Throttle to Bottle Pub for a pre-race party until 7 pm with live music, $1
beers, and a half-price bar menu. Racing begins at 7:30 with heat races for
the Sunshine Seamless Gutters Mini Stocks, Super Stocks and Bombers. After
intermission, the Sunshine Seamless Gutters Mini Stocks race for 25 laps
followed by a 25-lap contest for the Pro Late Models, 25 laps for the Super
Stocks and the evening wraps up with a 20-lap finale for the Bombers.
A reminder that this Saturday night all moms get in free and other adults can
get $5 off their admission by showing a recent O’Reilly Auto Parts receipt.
Otherwise, adult admission is $15 with all seniors (65+) and military with ID
admitted for $13. All kids 11 and under are admitted free. 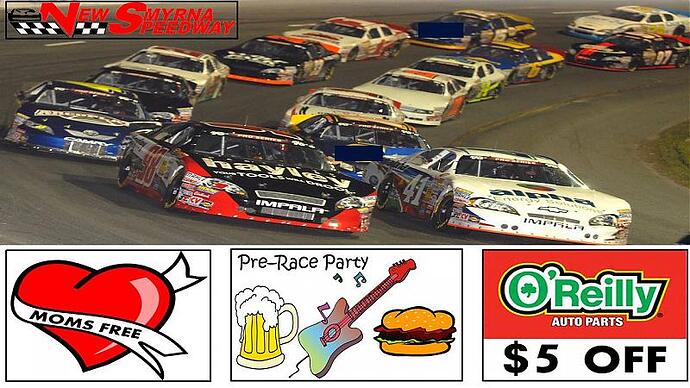