Many of you may remember Vince Gimondo, formerly of Orlando where he had his shop and built cars that competed on the SCCA Trans-Am and IMSA circuits… Vince passed away on Monday (17th) after a brief hospital stay at his home where he had retired in Tennessee. He was 84 years of age a the time of his passing.
Vince was known for his bald head and good sense of humor but he was a ferocious competitor… He had some really good races over the years but his best was in 1972 when he won both the SCCA Midnight Challenge Cup in February at Daytona then followed that up with a victory in the Paul Revere 250 on July 4th which was a NASCAR Grand American race that year… The photo with this post of him on track is from 1973 when he and Billy Dingman co-drove to a 5th overall finish in the 12 Hours of Sebring. His last full season of racing was in 1987 although he did come out of retirement to run a NASCAR Modified Tour race in 1998 at the Holland, NY Speedway.
He will be buried here in Central Florida. Funeral will be with Robert Bryant Funeral Home, 321 E. Michigan St. in Orlando. Interment will be at Glen Haven Memorial Park, Winter Park, Florida with military honors.

Photos are by Louis Galanos… 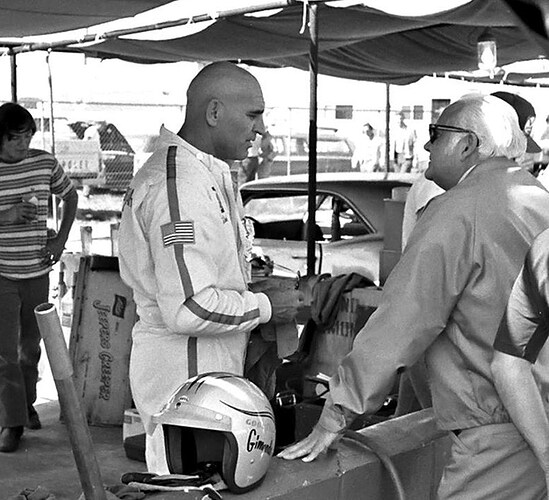 When I was very young and inexperienced I had a '66 Corvette with a 396 and it was damn fast. I knew someone with a 427/435 hp Corvette that had converted to a single 800cfm holley and the cars were equal.

Anyway, before I got it dialed, I unknowingly bought the car with a cracked block, then bought a junk yard motor, changed the heads and cam and a bunch of other things and the thing missed like crazy at and off idle.

But in exasperation I pulled out and romped it and it cleared out and burnt rubber for about half a block.

I knew Vince from the days that he was in some kind of partnership with Bo Laws and called him up at his shop.

He said bring it by and he would look at it. I replied that I was just too broke to do that. A heavy sigh came from the end of the phone, he asked me to go over the symptoms again, listened carefully, and finally said “Does it have a dual plane manifold?” I replied in the affirmative.

He said-- one of the primary barrels of that (brand new) carb is simply not flowing any fuel. Kick in the secondarys, and off you go.

It retrospect, it seems simple, like most things once you “get it”.

Anyway, he saved my bacon back in the day.

ps–If memory serves, the car in the pic was “plum crazy” (almost pink) and the center panels were light green.

Vince was a mentor…

[SIZE=“4”]Vince was a mentor to the young racers of that era. He worked with us the first years of racing in IMSA. First time I meet him he set my carb when it was flooding. Always there to get the needy back on the track. We will all miss him. Mr. Clean was a GREAT RACER!!![/SIZE]
:(

I Didn’t know him personally, but I watched him race when I was just dreaming of running pro road races. I always rooted for the Florida guys, and he was buddies with some that I knew. Godspeed, Vince.

I had the pleasure of knowing him and Arlene for quite awhile. He was good to me in many ways from modifying oil pans to helping me fix my race cars (front/rear clips) to building my tag trailer which I still have and use (30 plus years ago) and countless other projects and never charged me for labor. Visited with him and Arlene about 2-3 years ago in Tennessee(about 1 hr. from my house up there). Was planning on visiting him this summer but health issues of my own kept me down here this summer. He was a Great Person and a GREAT FRIEND!!!

OS and DD, really cool to hear of your experiences with Vince. That is the way true racers and good people are.