Quite a few of you remember Jim Sills who raced for several years (with much success) in the Sportsman and later Limited Late Model classes at Orlando SpeedWorld and New Smyrna Speedway… Well, Sills, who is now 57 years old and owns DJ’s Used Cars in Ocoee, FL (which he started in 1976), hopes to fill his longtime ambition to become Mayor of Ocoee. He has a tough fight against incumbent Scott Vandergrift and another challenger Martha Lopez-Anderson so it should be interesting to see if Jimmy can finish first in this race too. My friend Bill Posey, who also raced with much success all over Central Florida, started as the City Manager of Rockledge, then moved on to the Florida State Legislature and Senate before becoming elected to the United States House of Representatives. Here are two photos of Jim Sills from the late-1980s after a win at SpeedWorld and planting his first Jim Sills for Mayor sign the other day… GOOD LUCK JIMMY!!! 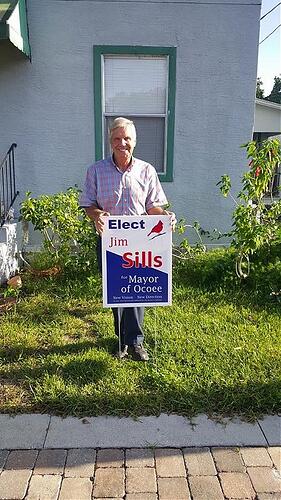