I am surprised nobody posted anything on the passing of Judy Allison, wife of Bobby, late last week. I had known Bobby for a long time but met Judy for the first time about three years ago when I was working at the Archives in Daytona… She was really a wonderful lady… Also finally got to meet and get to know Donnie Allison and his really neat better half Pat… Judy had more tragedy in her life than and wife or mother should have to bear… may she rest in peace…

Visitation for Judy Allison, matriarch of NASCAR’s Allison racing family, will he held on Monday, Dec. 28 in Bessemer with burial to follow at Highland Memorial Gardens.
Mrs. Allison, 74, died unexpectedly on Friday after complications from surgery in North Carolina.
Visitation will be from 10:30 a.m.-noon at St. Aloysius Catholic Church in Bessemer, followed by Mass of Christian Burial at the church beginning at noon. Burial will follow at Highland Memorial Gardens in Bessemer ? the same cemetery where her sons, Davey and Clifford, are interred.
There will also be a separate service on Jan. 9 in Mooresville, N.C. where she lived.
She is survived by her husband of 55 years, Robert Arthur “Bobby” Allison; daughters, Carrie Hewitt and husband, Scott, of Davidson, N.C., and Bonnie Farr, of Hueytown; sisters, Carolyn Woodward, of Dunnellon, Fla., and Connie Carroll and husband, Rufus, of Grand Island, Fla.; brother-in-law, Hank Halsey, of Blairsville, Ga.; 11 grandchildren, six great grandchildren, numerous brothers and sisters-in-law and numerous nieces and nephews. In addition to Davey and Clifford, she was preceded in death by a sister, Arlene Halsey.
Bobby Allison and brother Donnie, along with Red Farmer, comprised the famous “Alabama Gang” which raced out of Hueytown and made their mark in NASCAR in the 1960s through the 1980s. Clifford and Davey followed in their footsteps until their untimely deaths.
Clifford died at Michigan International Speedway in Brooklyn in 1992 during practice for a Busch Series Race. Davey, who had 19 career Cup wins, died in a helicopter crash at Talledega Superspeedway in 1993.
Judy Allison enjoyed crocheting, gardening, cooking and traveling. She was one of the founding members of the Grand National Racing Wives.
In lieu of flowers, memorials may be made to St. Therese Catholic Church, 217 Brawley School Rd, Mooresville, N.C .28117, St. Aloysius Catholic Church, 751 Academy Dr., Bessemer, Ala. 35022, Victory Junction Gang Camp, 4500 Adams Way, Randleman, N.C. 27317 or Big Oak Ranch, 6000 Shelley Dr, Springville, Ala. 35146. Cavin-Cook Funeral Home, Mooresville, N.C. and Peoples Chapel Funeral Home in Hueytown is serving the Allison family.
Condolences may be made to the Allison family at www.cavin-cook.com. 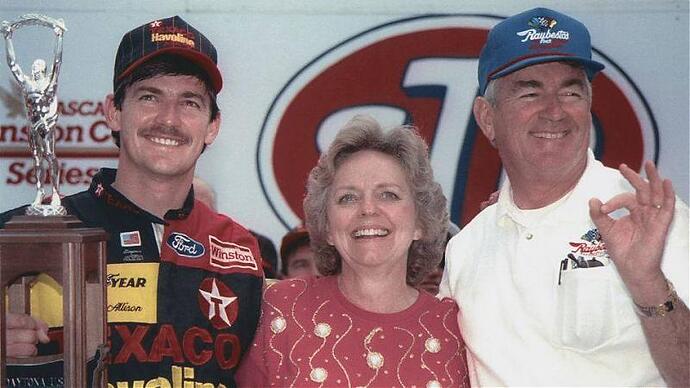 Agreed, May she Rest In Peace.