Heading into Saturday night’s Sportsman King of the Blacktop 100 at Desoto
Speedway, Earl Beckner had a simple strategy: ride in the top 15 and then
get to the top 10 to get to the final 20-lap shootout.

Beckner did just that, finishing in the top 10 in the first segment and
landing in the perfect spot for the inversion of the final segment of the
elimination-style race. That gameplan ? coupled with a little help from
Lady Luck ? saw Beckner take the main event and earn the crown of King of
the Blacktop for the Sportsman for 2016.

As Skaggs drove away from the rest of the field, the battle heated up for
the 15th and final transfer spot to the second 30-lap segment. Richard
Nelson. Mark Peterson, Roger Welsh and Tim Sozio. Sozio’s engine failed and
sprayed fluid on the track with two laps to go, forcing the segment to end
under caution after several cars battling for the transfer spot spun in
turn four. Peterson got the final transfer spot, while Kenny Gibson was
voted into the segment by the fans.

A five-car inversion gave Travis Roland the pole for the second segment,
but it was Stuart Vandevender that got the jump on the restart from the
outside of the front row. Colin Allman would drive up to the top spot about
halfway through the 30-lap segment, but Morris was on the move after
starting at the rear of the 24-car field and found himself sitting fourth
with just a handful of laps.

Stuart Vandevender fell out of the race on the final lap with a mechanical
failure, moving Morris up to second place behind Allman and locking Tom
Zimmerman, who’d been battling with Peterson and Cody Allen for the 10th
and final transfer spot, into the 20-lap shootout. Brooke Storer earned the
fan vote to get into the final segment.

Bill Vandevender found himself back in front of the field for the final
20-lap shootout thanks to a four-car inversion. The inversion also put
Beckner on the outside of the front row and he was able to get the lead on
the restart.

Becker fought off several challenges from Allman over the first half of the
segment before he started inching away from the rest of the field. Allman
had to fight off Morris to hold on to the runner-up spot in the closing
laps, allowing the Apopka driver to claim the crown of King of the Blacktop.

Beckner said the ?luck of the dice? helped him in the battle against the
faster cars of Allman and Morris.

?Around lap 43 we got a little loose, and thankfully we got a break to
adjust or else we wouldn’t be here right now,? Beckner said. ?We weren’t
great, but we were good enough to get it done.?

Jason Rendell and Steve Darvalics rounded out the top five.

The Southern Sprint Car Shootout Series was also on hand for its maiden
race at Desoto Speedway.

Jason Kimball, who held off Mickey Kempgens to win one of the three heat
races paced the field to start the 30-lap main event. Dave Steele, winner
of another one of the heats, started eighth and had already charged up to
second when the caution flew for Matthew Hall’s spin on the second lap.

Steele was sent back to fourth for the restart, but quickly joined Kempgens
at the front of the field. The duo caught heavy traffic on the 10th lap and
Steele stayed directly in Kempgens’ tire tracks as the cars flew around the
3/8-mile oval.

The leaders cleared the traffic and Steele made his move for the top spot
with an outside pass in turn four just past the halfway point of the race.

?He was definitely fast,? Steele said. ?I think one thing that helped us
when we were approaching lapped traffic was that he kept getting dirty air
off their cars. Our car was good from start to finish.?

Steele ran up on the pack of lapped traffic again in the final 10 laps,
even lapping the fast cars of usual Desoto contenders Troy DeCaire and
Sport Allen in the waning laps.

Kempgens used the lapped traffic to close in on Steele in the final laps,
but was unable to do anything with the two-time Little 500 champion down
the stretch.

?We were just running scared out there because we knew there were a lot of
fast cars,? Steele said. ?It was busy out there and you didn’t know who was
who or who was where ? so we ran like a scalded dog and hope we got there
first.?

Kimball finished third. Shane Butler, winner of the final heat race,
finished fourth and was the only other car on the lead lap.

Desoto Speedway will be closed next weekend and returns to action on March
19 with the Street Stocks King of the Blacktop, Open Wheel Modifieds,
Sportsman, Modified Minis, Bombers and Mini Stocks. 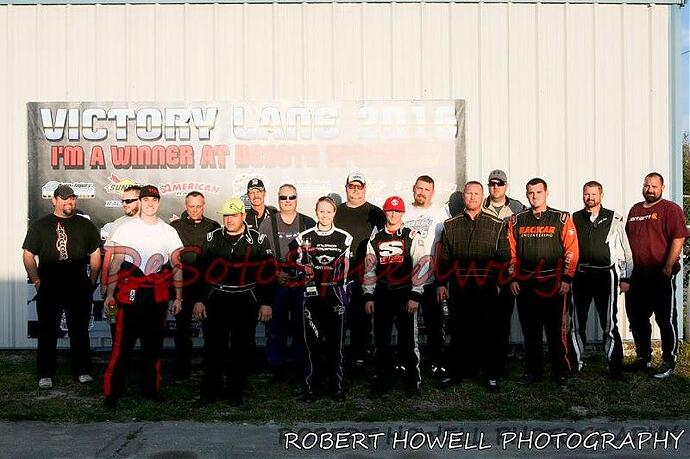 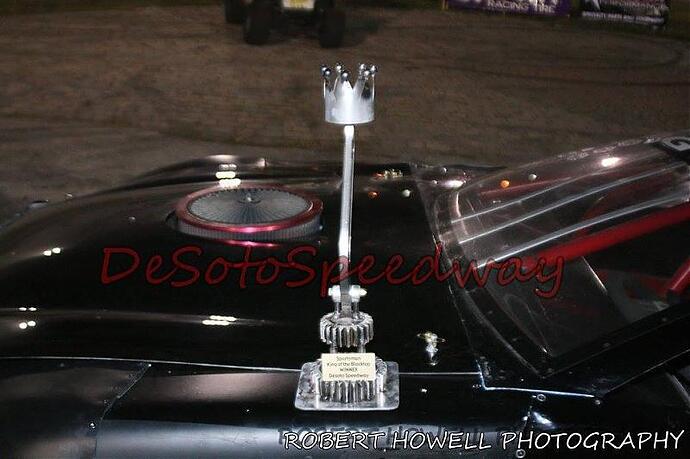 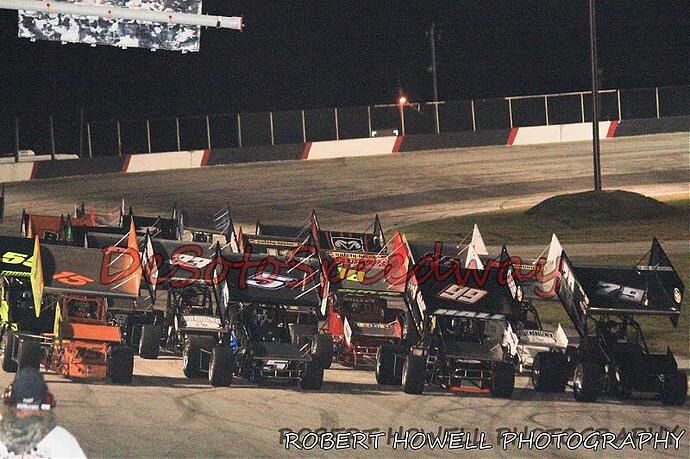 Wanted to take a minute

And Congratulate Earl Beckner. Earl is one hell of a man. At the Eddie Brann race a few years back i blew my motor in my car during practice the day of the race. Tony Carreno went down and spoke to him and before i knew it he was driving his spare car into my pits…He told me if I can fit into it I can race it…no strings. Thanks Again Earl and Congrats !!

That was a great format, great payout, and we had a blast. Good hard racing with Earl, Chad, Brandon, Stuart, Jason, ect. Side by side racing, and the tires held up just fine. Looking forward to the next 100 lapper. Thanks Ronnie Bacelo for giving us sportsman a big payout, extended lap race. Keep up the good work!!

Great win J.R. you earned that win. You had a good car and took care of it, and had the best car the last 12 or so laps. I know we don’t always see eye to eye, but I’m proud of you, in a very good field of cars, you pulled off a big win.

Wish I could have been there, but family stuff comes first. I will make all the series races and I’ll be there for the 200 lapper later this year.

Thanks Ronnie and Desoto speedway for giving the sportsman guys a big money, extended distance race, car count was good and from what I heard you will have more for the next one.