After a wild and somewhat controversial race, Becca Monopoli of Lakeland once again found herself in victory lane after 50 laps of Southern Pro-Am Truck Series action at Bronson Speedway.
The Series made its first-ever visit to the Bronson “Bullring” and although the number of trucks in attendance was not what was hoped for, the on-track action was aplenty.
The first half of the event was dominated by Venice driver Dean Butrum but, by the halfway point, he had Monopoli right on his tail gate. Things came to a head with ten laps to go as Monopoli spun Butrum going down the backstretch as the two were racing tooth-and-nail. Neither driver would admit to being at fault so, as per Southern Pro Truck Series rules, both were sent to the rear of the field for the restart.
At that point, Taylor Hosford inherited the lead and was looking for her first career win to help celebrate her recent 21st birthday. But once the green flag dropped, Monopoli was on a mission as she began picking off her challengers and amazingly zoomed by Hosford for the lead with two laps to go. Monopoli then drove away for her second consecutive SPATS victory while Hosford held on for a career-best second place giving the lady drivers a 1-2 finish over the guys.
Butrum also made a late charge to snag the show position ahead of Cole Partelo and Randy Leonard.
The Next race for the Southern Pro-Am Trucks will be on Saturday July 9th and on Sunday July 10th at Sebring International Raceway. More information on this exciting event will be forthcoming. 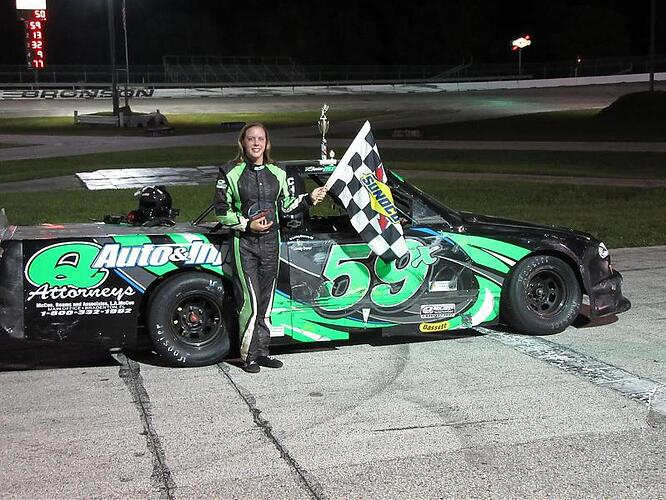 Dave nice coverage and it was a really good race

Nice Job on the story…

[SIZE=“5”]Nice job on the story Dave. Congrats to both girls. I heard Bobby Gordon was there? Bronson is a great Track. We retitled it Florida Bristol. The "Old Farts Traveling Fan Group are already get the tour together for Sebring!!! Hope to see everyone there. Go GIRLS Gooooo…[/SIZE]