There will not be practice tonight 11-18

This Saturday night Desoto Speedway is the place to be. There will be three championships decided at the end of the 100 lap finale . Desoto Speedway , DART Series and the Florida Pro Truck Series will all see there champions crowned when the checkered flag falls.
There is NO PRESSURE at all for all the front runners and its anybodies to lose. The one that has a mirror full of talent is #59x Becca Monopoli as she is the current leader in both the DART Series and the Florida Pro Truck Series. Monopoli has been to victory lane at both Showtime Speedway and Auburndale Speedway in the 2016 season.
#25 Cody McDuffie has also been a tough competitor all season capturing several Fast Time Awards and wins at Desoto Speedway, Auburndale Speedway and Showtime Speedway. McDuffie is on a mission; Monopoli may have it, but he wants it. Keep your eye on the potent Chevrolet of McDuffie as he makes a run for it.
Another one of the hotshoes in the Truck Series is Desoto Speedway points leader #28 Corey Bigley you can never count him out. Bigley?s record shows he means business, 7 top 10?s, 3 top 5?s and one trip to Victory Lane in 7 starts at Desoto Speedway.
#3 Derek Pugh has stayed in the top 5 in points in two of the series and has set his sight on that top prize. Don?t be fooled by his boyish looks he can wheel that truck and is one to keep your eye on.
This kid may be small but behind the wheel of his powerful #99 Cody Martell packs a mean punch. Martell came on strong and had back to back wins. Martell parked his chevy in victory lane at Desoto Speedway and backed it up with another at Auburndale Speedway the next race.
When you mention the Black Knight the first person that comes to mind is #37 Michael Goddard. You can never count him out as he can bust off a lap to nab the Fast Time award and then backed it up with a win at Desoto Speedway.
Last years Fast Truck Champion #50 Danny Anderson is also one to watch as he never fails to impress when it comes down to the wire. Anderson also placed a ?W? on his resume in 2016.
Don?t leave out the sleeper #12 Scott Hogan, Hogan captured the Inaugural King of the Blacktop at Desoto Speedway earlier this year and is always a force to be reckoned.
#52 Joe Winchell the driver nicknamed ?Hero? has wins in almost anything with wheels, and has a ?W? at every track in the state. Winchell who normally pilots the #15 Masterset Tile machine in the Sunoco Super Late Model Series and the Danny Maddox owned #82 at Showtime borrowed the #52 from Pedro Rodriguez and has plans on winning this 100 lap finale.
The list of drivers set to take time for the finale is a long one, plan on #11 Billy Carlbert Jr, #22 Cameron Cruse,#5 Cody Carlbert, #7 Jason A Lester, #37 Nick Hernandez, #32 Dean Butrum, #99 Bobby Gordon and several more.
Both the Desoto Speedway and DART Series will be running for Double Points in this event.
This is one of them nights you just don?t want to miss. It?s not just a RACE, It?s a FINALEx3!
While we praise our tagline ?NO DRAMA, JUST FAST?, this is one race where drama just might prevail…
See you at the Races! Grandstands open @ 4:30, Qualifying @ 6, Racing @ 7pm Grandstand Admission $15 for Adults, $13 for Seniors/Military, Children 10 and under are always FREE! 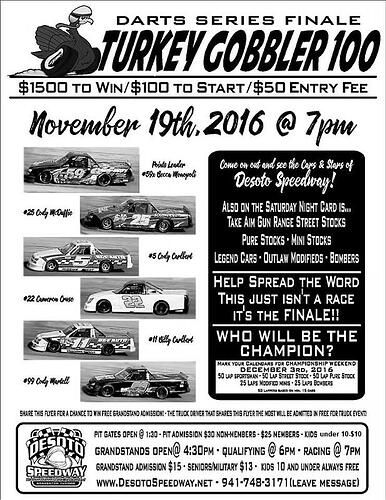