The Sunshine State Challenge Series Modified Mini Stocks were in action for the third time this season at Auburndale Speedway and a third different driver emerged as the winner on the evening while a couple of new faces graced victory lane in the other classes.

Chuck Frazier zipped around the “Bull Ring” in 15.036 seconds to set the fastest time in qualifying with defending Auburndale Mod Mini champion Chris Spring second quick at 15.155. Third fastest was Jeff Firestine with a lap of 15.193.

It would be a very early evening for the fast qualifier as he found himself hard into the turn two wall on the opening lap. Robert “Boogs” Fellows, running inside of Frazier, had “something break in the steering” and he slid up into Frazier, putting him into the wall. Fellows apologized to Frazier saying “there was nothing I could do” and Frazier took everything in stride saying “it’s all good, man… that’s racing.”

Once the race got under way, Mike Kerrivan shot quickly to the point but only for two laps as Spring was on the charge and took over on the third lap bringing Firestine and Ken Nurse, Jr. with him. Despite five yellow flag periods for minor incidents that jumbled the restart line-up several times, that’s how they finished with Spring pulling away at will after every caution. Nurse actually held the second spot until the white flag lap when Firestine got by for the runner-up spot. Nurse held on for third trailed by Kerrivan and Marshall Parr. Josh Smith was sixth followed by Rachelle Rudolph, David Myers, Sr., Jimmy Wood, Fellows and Frazier. Larry Hallam was unable to start.

With point leader Tyler Simpson not in attendance for this event, it looks like Spring and Firestine will be in a virtual tie in the SSCS Mod Mini point standings when they are released later this week.

Working the “bugs” out of his new car at just the right time, Orlando’s Donovan Ponder led all the way to win his first Legend Car feature of the year and break the Seth Adams Racing stranglehold they have had on the class this season. SAR driver Kyle Pitts won the heat race but finished well behind Ponder in the headliner. SAR’s L. J. Grimm claimed the show position over Alan Hiefnar, Cale Nolen, Tim Harris and new daddy Michael Cherry who dropped out early due to damage incurred in a heat race tangle.

Action in the V-8 Bombers began early with a huge tangle coming off turn four in the heat race as leaders Chris Narramore, Jr. and James Wright III bounced off the wall exiting turn four causing the field to scatter. Bubba Healey had to take his car to the pits with a busted radiator while several other machines suffered minor damage.

One lap after the restart, Narramore’s car went straight going into turn one with Wright outside of him. Both cars slammed the wall with Wright’s machine a total loss. Fortunately both drivers emerged unscathed but Wright said he felt the incident was intentional on Narramore’s part while Narramore attributed the crash to a stuck throttle and that fact was echoed by his car owner Scott Clements who indicated anyone could come by, look at the car, and see the pedal was still jammed to the floor. Video of the crash also showed Narramore was hard on the brakes and they were smoking well before reaching the corner. Brandon Duchscherer was awarded the heat race victory at that point.

Undaunted, Wright went to his nearby shop and brought out his back-up car to run the feature. Healey also went to his shop for a new radiator and other parts and was able to make the feature race too… plus got to start on the front row to boot. Healey made the most of it leading every lap to score his first win of 2017. Danny Burchfield turned around some recent hard luck to claim second while Duchscherer out-ran Wright for third. Mike Hubbard was fifth followed by Ricky Norman while Narramore was unable to start.

It was heartbreak for two drivers in the Mini Stock class while everything played right into the hands of Chris Narramore, Sr. who remained unbeaten in his starts this year at the speedway.

Colt Cecil ran off with the heat race and appeared to have the fastest car at the track on this night. However, the timing chain broke in his car’s engine while waiting to come on the track and his machine was pushed silently into the pit area.

Veteran Tony Davidson streaked out to a huge lead and he was in full command by nearly a half lap over the field when caution flew for a tangle between Gordon Weaver and Fred Martin on lap eight. Narramore moved up to the outside pole for the restart and zipped into the lead although Davidson was able to keep him honest the remaining distance. With the spate of mechanical problems Davidson had been enduring in recent weeks, he was fairly happy with his second place run. John Cummins, Jr. came home third followed by Bruce Cozad and Danny Leet. Rounding out the finishers were Weaver, Martin, Brad James and Cecil.

Andy Travis appeared to just hold off Dustin Wilson at the stripe to take his first Scrambler win of the year just before the pair locked horns going into turn one after the checker fell. Travis exited his car before being allowed to do so by track officials. That is against speedway rules and Travis was disqualified. Travis said he was OK with the DQ as it was his own fault for getting out of the car but he felt Wilson should also be set down for his involvement in the tangle.

But, when all was said and done, it was Wilson being awarded the victory, his fifth of the year. Glen Swanson was a close second ahead of Shane Bennett who led much of the early going. Keith Cantrill, Anthony Carroll, William Kerns, Dustin Eckerson and Travis completed the finishers. Travis was the heat race winner.

Russell Bush got by early leader Doug Higbie on lap eight to claim the Mini Cup feature win in impressive fashion. Higbie ran to a nice second place finish trailed by Douglas Herrin, Jr., Clay Samuels and Bill Rychel. Chip O’Toole was unable to race after losing an engine during the heat race that was also won by Bush.

Preston Davis led all the way to win the Figure-8 feature, his second of the year. Neil Herne was second ahead of Chuckie Herne, Joey Caterelli, James Teague and Matt Owens. Point leader Wayne Calkins was unable to start. 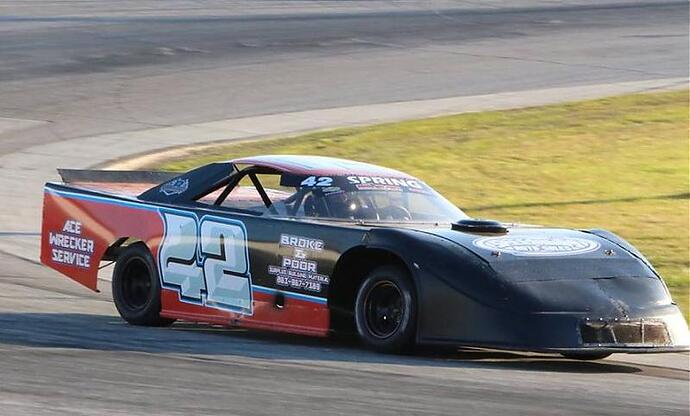 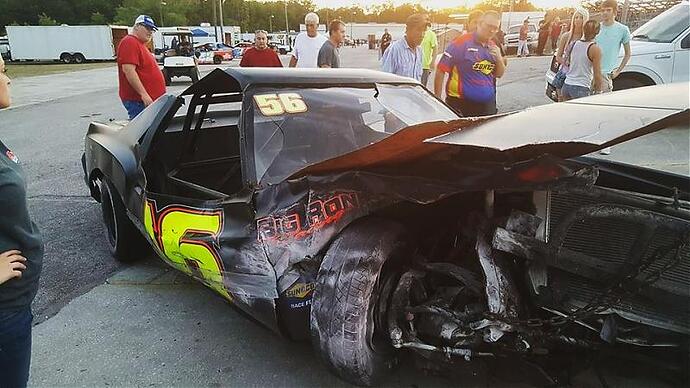