Check out my dad! This car was an Ohio track roadster with a straight 6. The year was 1949 or maybe 1950. It was painted yellow and carried the number 16. I had a few number 16’s over the years, and this was the reason.

I love the picture of him working in his “engine shop”, which was actually the back of an old trailer, out in the sun.

The racing only went on for a few more years; he was a factory worker with a growing family, but he maintained a life-long interest in racing, and still makes it to some of my events when he can. Nothing comes easily at 89.

Racing is multi-generational…who is next with some pix of dad’s hot rods? 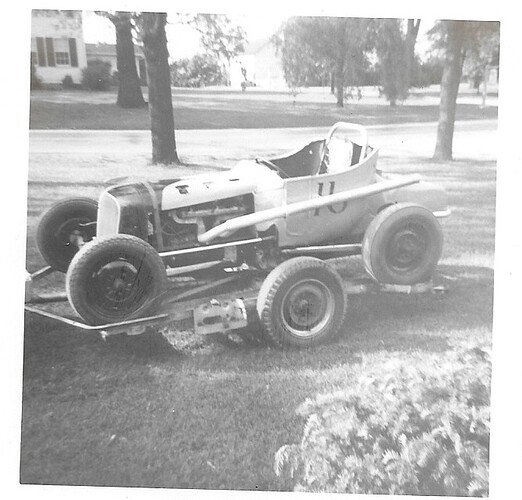 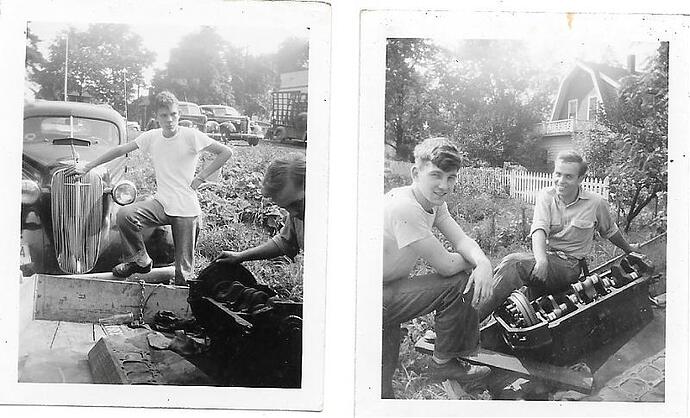 Wish I had some pictures of my Dad and his race car(s), but none exist as he was convinced that anything to do with racing (auto) was a bad thing… in fact, he wouldn’t allow me to go to any races. Me being the person I am, lied to him and said I was going to H.S. football games and would sneak out to watch a race (thankfully he never asked much about “The Game”)… He was a good guy, but a firm ole Irishman who you (I) didn’t want to cross paths with.
But I did enjoy viewing your Dad’s pictures. 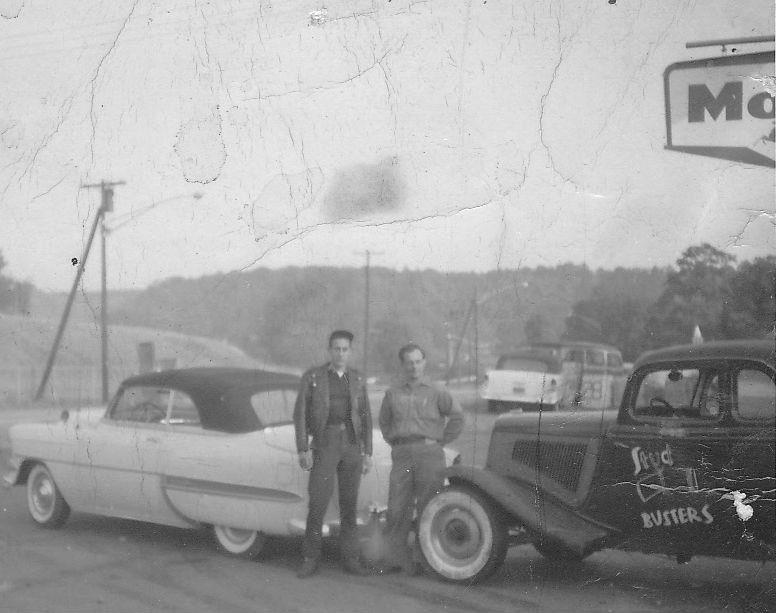 Wish I had some pictures of my Dad and his race car(s), but none exist as he was convinced that anything to do with racing (auto) was a bad thing… .

Same here as OSF, my dad could barely open a hood. But he did get a couple of free tickets to Riverside Speedway in West Memphis for one Saturday night, and he took me, and that was it. Done. Never again interested in any other sport. I was probably 9. My dad willingly took me to the races whenever he could, and sometimes on the way home, we’d stop at Shoneys for a milkshake. That may not be my best memory of my dad, but I can’t think of a better one right now. He didn’t live to see me race, or for me to introduce him to the dozens of people in motorsports I’ve been able to meet. I wish I would have told him how much those Saturday nights in the ancient grandstands at Riverside – sitting just up from Elvis’ family (but never Elvis), smelling the BBQ cooking downstairs, watching Sam Swindell and Hooker Hood and Elmer Gray and Buford Ward racing – well, it just didn’t get no better. Miss you, dad.

When I was born my dad was an auto mechanic in Bartlesvile, OK… He helped build a Packard that set a record at Bonneville in the early '50s… Went into electronics to make more money and we moved to Ft. Wayne, IN in 1955… A year later he took me to my first race at Ft. Wayne Speedway… Even at just 3 1/2 years old I was hooked… When we moved to Fl in 1959, money was real tight after my folks bought their first (and what would be only) house… After a couple of raises at Martin Marietta, we started going to the races at old Orlando Raceway late in the 1962 season… The next year my brother, who was 5 years old now, wanted to go to the races too but my mom wouldn’t let my dad take both of us because she was worried he’d pay more attention to what was going on on the track than to us… So, my dad suggested she come along too and reluctantly she agreed… Well, she got hooked as well and going to the races became a family affair from then on… We started going to Eau Gallie and a few other tracks and in 1967 made the trip to Golden Gate Speedway in Tampa every Saturday night… My dad always wanted to put a car together but my mom pretty much kept that from happening and the money was never really there anyway… In later years I would pick my dad up and take him to the races… Hard to believe he’s now been gone over 20 years…

My 1st race was midget show at Orlando in the late 40s.I still have the program.The name that stuck with me and thus became my hero was Al Keller.Little did I know that Alwould manage Eau Gallie Speedway in the late 50s.I have an 8x10 of AL, my father, and Happy Stiegel taken at the track together. Sadly I would lose my father in JUNE 61 and Al was killed at Pheonix Nov. 61.Great memories and my first hero that did not ride a horse or wear a star. Priceless memories.

My Dad worked at what is now Lockheed Martin in Orlando as an engineer, and took me to Orlando Speedway each and every week.

Learned about cars and all things mechanical from Dad, as well as the value of vacationing from time to time and many other things…

Dad is still with us, although fading a bit. Now I take him to the races occasionally.

And while I am thinking about it, “Happy Father’s Day” to all the Dad’s who have been away at work or racing or whose deal didn’t work out as they had hoped and their kids are not as close as they would like.

And conversely, be sure to wish your own Dad “Happy Father’s Day”. It means a lot.

My dad was one of those

Tough as nails military guys who survived Korea but remained in the Guard afterwards all the way to Desert Storm.He taught us three things,a work ethic,the values of athletic competition (that one rubbed off on my brother more) and a love of cars and circle track racing.He wasn’t around a lot through my teenage years after my mom died.And when he was I mostly wished he wasn’t.Between his full time government day job,his gym and his body shop/garage he made himself scarce.So there was clashing.The race track was our common denominator and he knew it.And he never missed a night I raced. 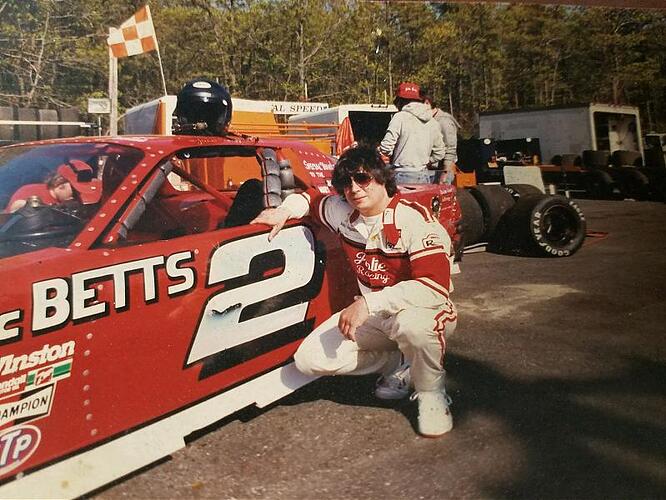