Auburndale Speedway finally got around to beating Mother Nature Saturday night as the track celebrated Father’s Day through the courtesy of Max 98.3 Radio as all dads got $5 off their general admission. The skies were dark all around the speedway and a light drizzle began to fall around 6 pm. However, the heavy rain moved well to the north and the track was easily dried in time to get things under way at the scheduled start time of 7 pm.

Headlining the show for the night were the Sunshine State Challenge Series (SSCS) Modified Mini Stocks. Because of the precipitation, Mod Mini qualifying was canceled and the drivers drew for position for their 35-lap contest. The initial start was called back when Jeff Firestine and Scott Bumgardner got tangled up in turn four. Once the field took the green flag in was Ken Nurse, Jr. nabbing the early advantage. Point leader Chris Spring made a bold three-wide pass to take third spot on lap two just as the caution flew for a Bumgardner spin in turn two.

Spring wasted little time bolting to the front on the restart with Firestine a close second. The final caution of the race flew on lap eight as Colt Cecil, running his “regular” Mini Stock in the race, spun in turn two and was collected by David Myers, Sr. Neither car was damaged and both were able to continue.

From that point it was all Chris Spring as he dominated the rest of the event despite losing his power steering just after the lap eight restart. Spring crossed the stripe well in front of Firestine and Nurse while Mike Kerrivan and Josh Smith followed. Sixth went to Marshall Parr ahead of Cecil, Bumgardner and Myers.

The V-8 Bombers ran a pair of 25-lap races. While lining up for the first race, the rear end broke in Ricky Norman’s car before he could even get to the flag stand. That caused a delay to clean up a ton of rear end grease that was left on the front stretch. Once the race got under way it was Mike Hubbard the early leader before Ed Shultz and Jeff McCaw tangled on the back stretch to bring out the yellow flag on the third lap. On the restart it was James Wright III powering his way to the point.

Things came to an abrupt halt on lap seven as David Purvis got loose going down the back stretch then slid directly into the end of the pit exit wall. The red flag was displayed as Purvis climbed from his battered car in OK shape. The car itself, though, looks to be a write-off. After another lengthy track clean-up, Wright assumed his place up front with Bubba Healey scooting into the second spot. Green stayed out until Adam Briggs blew a right front tire and came to a halt at the top of turn four on lap 18.

Wright had no problems out front as he again pulled away on the restart and was cruising to the checker when Danny Burchfield and Brey Holmes got tangled up in turn four with two laps left. Again Wright pulled away on the restart to claim the win over Healey and Hubbard. Holmes and Burchfield battled back to take fourth and fifth. Jody Gill claimed sixth followed by Shultz, Briggs, McCaw, Purvis, Ronnie Abney and Norman.

Before the second 25-lapper, David Purvis’ crew pulled the rear end out of his wrecked racer and installed it in Ricky Norman’s machine so he’d be able to get to run at least one of the races. The cars on the lead lap of the first race were inverted for the second event as Shultz zipped to the front only to see caution quickly for McCaw’s stalled car. Burchfield charged to the front to lead laps four and five only to see his momentum snapped by a debris caution on the fifth lap.
Wright had worked his way up from a mid-pack starting position and he pounced quickly after the restart to take over a lead he would not relinquish. At the checker Wright easily outdistanced Hubbard and Healey as that pair reversed their 2-3 finish from the first contest. However, in post race tech, the heads on Hubbard’s car were ruled illegal and he was disqualified from his top-three finishes. That moved Healey up to second in the finishing order of this one as Burchfield would end up claiming third place in front of Gill and Holmes. Norman brought his car home in sixth ahead of Briggs, Shultz, Abney and McCaw.

Wright was quick to thank his dad, James, Jr., for all the hard work he puts into his car. “My dad is the reason this car runs so fast and is so easy to drive,” said Wright. “He really works hard to make this race car better and better and what a better Father’s Day gift than to get both of these wins. There as much his as they are mine,” he said.

The Legend Cars were back in action and they did provide plenty of that, right down to a shocking ending that saw the top two cars on the last lap end up last and next-to-last when all was said and done in their 20-lap run.

Joey Langis jumped out to the early lead only to give way to Donovan Ponder on lap four while heat winner Seth Adams pulled right up on Pnder’s rear bumper as the pair began putting on a crowd-pleasing battle. During lap ten, Ponder went low to lap Wild Willie Wilson but Wilson also dropped to the low side and Ponder ran right over Wilson’s car, flew into the air and spun. Wilson was black-flagged for not heeding the move-over flag and Ponder returned to the lead only to bring out the caution again just after the restart when his right front fender flew off going into turn one.

Ponder remained on point for the restart but Adams was trying to take advantage of Ponder’s now ill-handling machine. Adams eventually slipped past to take over the lead on lap 18 but Ponder would fight back making a final low-side charge on the final lap that led to the lead duo tangling out going down the back stretch on the final lap. Third-running Kyle Pitts, Adams’ SAR Racing teammate on the night, came across the stripe as the surprise winner while Adams went gunning for Ponder who quickly exited the track with his racer.

As Pitts celebrated his “crazy” win in victory lane, both Ponder and Adams were disqualified for unsportsmanlike conduct. For Pitts, it was his second win of the year, the other coming behind the wheel of Adams’ car a few weeks back. Langis took home second ahead of point leader Alan Hiefnar. Mike Verhaagh was fourth with fifth going to Chase Lovelady in his first-ever Legend Car start. Completing the finishers were Dave Fusco, Blake Boyette, Cale Nolen and Wilson.

The Mini Stock feature saw John Cummins, Jr. lead the opening four laps before heat winner Bruce Cozad took over. Point leader Chris Narramore, Sr. was on the move however and took over the point on lap nine never to be headed in the all-green flag affair. Cozad’s engine went south on him during the 11th lap and he fell by the wayside after a strong run.

Narramore breezed to yet another victory ahead of the late charge of Colt Cecil and Cummins who had yet another strong run. Danny Leet was behind the wheel of Tony Davidson’s yellow #53 and he claimed fourth spot to end a very trying week for himself, personally, on a good note. Fred Martin took fifth while Donald Gatlin and Cozad were DNF’s in sixth and seventh.

Unfortunately Gatlin had pulled to the infield because he was having trouble breathing and track officials were quickly notified of the situation just as the race ended. Head track EMT Matt Nichols iced Gatlin down and gave him IV fluids. Reynolds noted that Gatlin’s blood pressure was extremely high and had Gatlin taken to Winter Haven Hospital where he was joined by his wife. Gatlin’s wife indicated that the doctor attending to him said Gatlin was just seconds away from having a stroke. Gatlin’s wife says she would like everyone to know that he is recovering nicely and wanted to tell everyone who helped him, informed her, and prayed for him, a huge thank you.

The Scrambler feature also ran green to checker as heat winner William Kerns led the first eight circuits before Dustin Wilson slipped by and went on to win his eighth feature of the season. Kerns and Andy Trvis tangled on the final lap as Keith Cantrill moved up to second at the finish. Anthony Carroll was third at the checker but was set down in tech for too much left side weight. That moved Travis up to third spot followed by Kerns and Carroll.

Russell Bush dominated the Mini Cup action winning both the heat and feature. Bush led Clay Samuels, Douglas Herrin, Jr. and Bill Rychel to the stripe for the finish.

Photos by My Country Photos: 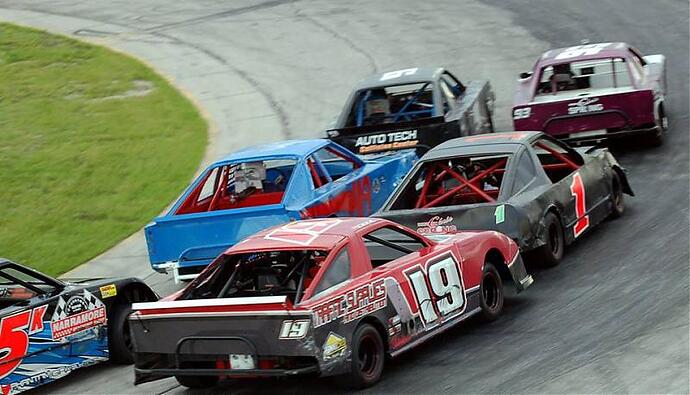