Auburndale Speedway returned to action Saturday night and the Harvest Meat Markets Family Night brought in a nice crowd to watch the program and eat plenty of $1 hot dogs. Interestingly enough, of the five feature winners on the evening, three were “juniors.”

In the V-8 Bombers, heat winner James Wright III sped out to an early advantage only to be chased down and passed by George Gorham, Jr. who again was driving Bubba Healey’s potent Camaro as Healey was planning to run in the Outlaw Figure 8 race later on in the program.

Wright and Eddie Hartin tangled up in turn four during lap 11 and were both sent to the rear of the field for the restart. From that point Gorham ran away from the field to claim his third win while driving for Healey. Danny Burchfield made a late race pass on Brandon Duchscherer to take the runner-up spot. Wright and Hartin roared back to claim fourth and fifth ahead of Edward Schultz, David Purvis, Ronnie Abney and Jody Gill.

The Q Mini Stock feature was a crazy one to say the least. Heat winner Donald Gatlin jumped to the early lead but was passed on lap five by Chris Narramore, Sr. Four laps later the caution flew as Chris Narramore, Jr. got his car stopped in turn four just before hitting the wall. “The steering wheel just came right off and fell on the floorboard and I was lucky to get the car stopped,” said Narramore.

Gatlin sped back to the point on the restart but almost immediately his engine blew in turn two and he pulled off the track. Narramore, Sr. led the 11th lap before the yellow was thrown to check for fluid on the track from Gatlin’s car.

Narramore, Sr. opted to restart the race from the outer lane which proved to be his undoing. Narramore, Jr. was back in action and running well and, with a little “bump drafting” help from Bruce Cozad, took over the top spot with Cozad speeding into second. From that point Narramore, Jr. was in control as he led the remaining eight circuits and put an end to his dad’s two race win streak. Narramore, Sr. got around Cozad late to secure second and a nice “family reunion” in victory lane. Cozad held on for third with new driver Duker Holley having a nice run for fourth over Freddy Martin, Tav Gary and Gatlin.

Maria Martins dominated the Mini Cup feature but it was all for naught as the 14-year-old young lady was set down in tech for a weight infraction. Second place Douglas Herrin, Jr. was elevated to the feature victory after he won the earlier heat race. Russell Bush moved up to second ahead of Clay Samuels, Bill Rychell and Martins.

Bradenton’s Garrett Thompson made a visit to Auburndale Speedway and promptly led every lap of the heat and feature to claim honors in the Street Stock division. Steven O’Steen took second in the feature race ahead of Ross Francisco, Josh Lindsay and John Smith. 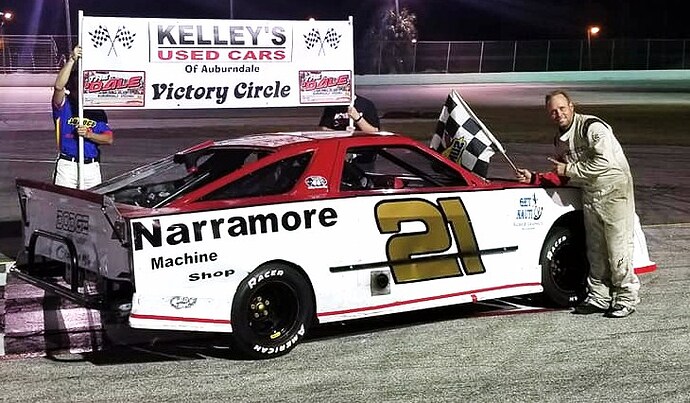 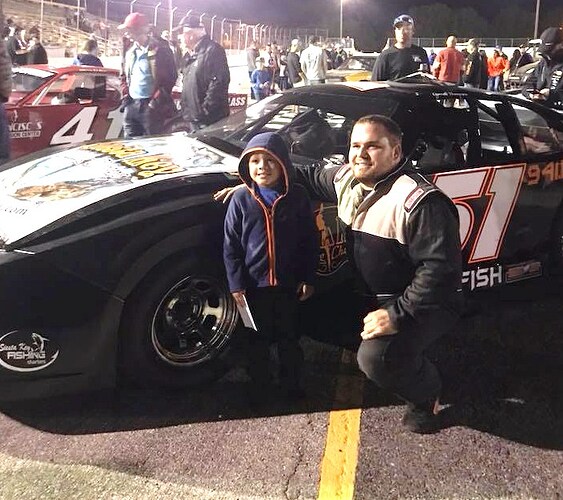