Auburndale Speedway returns to action Saturday night with the biggest show of the year so far. The Super Late Models will run the Spring 125 presented by WPCV 97.5 Country Radio. Then it’s the Spring Forward 50 for the Wheelman Sportsman Series, the first time this Series has competed at Auburndale. Also on tap will be 25-la[p feature events for the Legend Cars, Q Mini Stocks and the Mini Cup cars.

At least two drivers will be doing double duty as both Devin McLeod of Zephyrhills and Lakeland’s Aaron Williamson will be racing in both the Super Late Model and Sportsman classes.

Pit gates open at 12 noon with practice for Sportsman and Super Late Models from 2-3:30 pm. Practice for all other classes begins at 3:45 pm and will last until 4:45 pm.
Grandstand gates open at 5 pm and the Super Late Models will take to the speedway for a final practice session from 5-5:30 pm. Qualifying for the Wheelman Sportsman cars is slated for 6:15 pm. Racing begins at 7 pm with a 25-lap feature race for the Mini Cup cars. Super Late Model qualifying follows then it’s 25 laps of racing for the Q Mini Stocks.

Intermission follows with (weather and time permitting) an on-track autograph and photo op session for all divisions competing. The Spring Forward 50 for the Wheelman Sportsman Series follows intermission then it’s a 25-lap contest for the Legend Cars. The big night of action concludes with the Spring 125 for the Super Late Models. 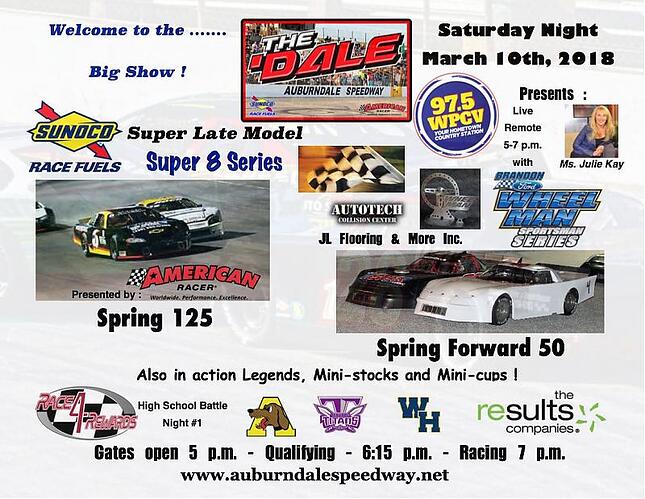