Still an inspiring short track success story, Bowman Gray Speedway is celebrating its 70’th season of continuous operation this year. I went last Saturday night and soaked it all in: a 100 lap modified race with 24 cars, 35 Stadium Stocks, a total of 100 cars in 4 classes and the entire stadium filled to at least 90% capacity.

Their show was loud (the best sound system in the short track world) and fast (green at 8, checkered at 11). While there is plenty of contact between the cars, there was only one “Madhouse” incident when a BGS veteran unloaded on a visiting car while under yellow. They had tangled, so the car that could pull away (Frank Fleming), pulled ahead, then backed up delivered a demo derby quality hit on the other cars left side nerf bar. Yep, the crowd was pleased.

The 24 mods were there to race, and the championship battle is very real. There were no start and parkers either. Yes, the modifieds can pass at BGS, but it usually looks different than what we are used to. Most passes occur on restarts, and many involve the bumpers and nerf bars. They use the “cone” style, double file restarts, and it added so much to the show! They can run door to door, but considering how flat and narrow the track is, every driver better be prepared for plenty of contact front and rear.

The massive crowd of locals attracts lots of local sponsorship dollars. In fact, the announcers had to hustle all night because there were so many sponsored awards, bonuses, programs, etc… it was hard to fit them all in.

One chronic problem: so many yellows were caused by spinning cars that went into the infield and threw dirt up on the track. Why can’t this be addressed? For starters, they need to black flag the many drivers who pull up and stop to draw a yellow. Also, can they pave an apron around the track? What about spraying it with rubber coating or something? I know they have to deal with the university or whoever owns the facility, but something needs to be done, even if it is tell the drivers there will be a lot fewer yellows and you need to drive through the dirt for a lap or two.

To the credit of the track crew, they had their blowers fired up and working almost before the cars slowed down. They did not need to be shaken awake like at some Florida tracks. Still, so many yellows hurt the show.

I know you are wondering…this was my third different Carolina track in three weeks, and was the FIRST to have soap in the bathrooms. Naturally, they had no towels. SMH! This is easy to fix, why can’t anyone get it right?

Overall, what a fun night at the track! 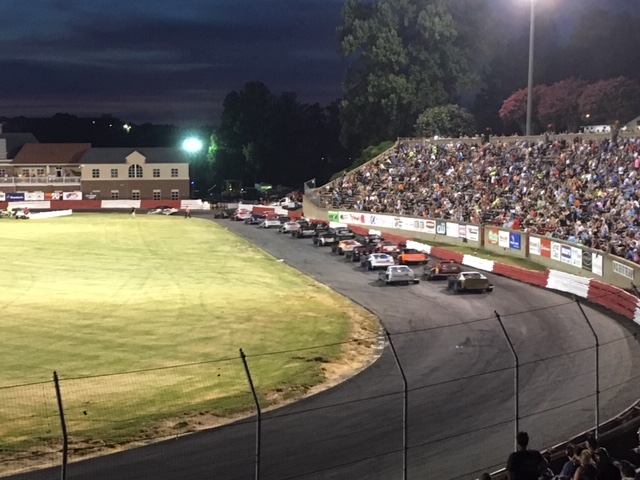 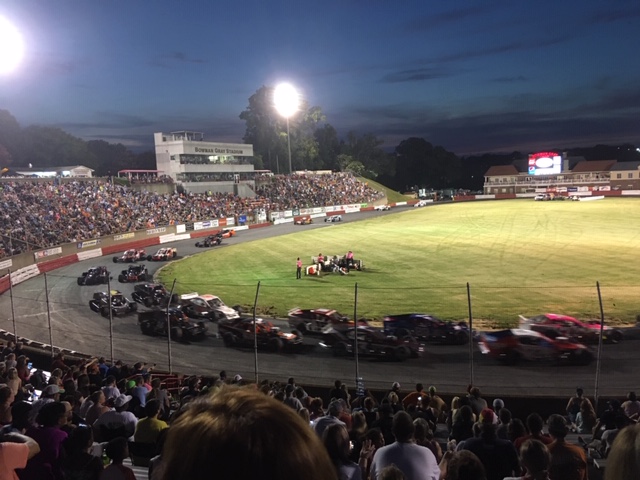 I was just reading online that there was a woman sportsman driver at BG that was arrested around 6:30 pm Saturday night at the track and charged with domestic abuse.So I guess the Sportsman division would have had one more car.The stands sure don’t look empty which makes me wonder what that kind of crowd would be described as here in Florida.A crowd half that size is usually described as a “packed house” here in Florida,so does that qualify as “overflowing”? I think the constant stop to bring out a yellow should be allowed…as long as you don’t mind losing a lap.Otherwise don’t do it.Its a race,not a parking competition.Gee Boneman,you want soap and towels too? The next thing you know,you’ll be asking for cold beer too.lol

fanschoice.tv has the replay tonight at 8.
Previous broadcasts this season from the Madhouse have been a very decent quality in my opinion.

Seems the speedway, Winston Salem State University and the city of Winston Salem have a fragile relationship. Both the college and the government would like to see racing go away but cannot replace the revenue generated from it. A few years back, Richard Childress was heading an effort to basically replicate the whole facility about 20 minutes away near his race shops and winery in Welcome NC.

I made a trip up to Bowman Gray last summer. What a spectacle, we had an awesome time. That track should be on every race fans bucket list.