Bakersfield, CA (December 3, 2023) – After a four-race inaugural season in 2022, the ‘SRL National Super Late Model Tour’ will more than double its schedule in 2023 with at least eight national championship events reaching from coast to coast.

The ‘SRL National’ is an expansion of the “SPEARS (SRL) Southwest Tour Series,” which has sanctioned Super Late Model events on the west coast for over twenty years.

In 2022, the ‘SRL National’ sanctioned marque events at Berlin Raceway, Citrus County Speedway and Mobile International Speedway. The ‘SRL National Tour’ will return to those same tracks in 2023, plus the $25,000 to win “All-Star Showdown” at Southern California’s Irwindale Speedway and the 47th running of “The Rattler 250” at South Alabama Speedway.

The SRL National Super Late Model Tour is proud to announce the re-opening of Lebanon, Missouri’s I-44 Speedway exclusively for two ‘SRL’ events in 2023. Additional race dates for the “SRL National” tentatively include October 13th and 15th, as well as November 24th and 25th.

The driving force behind the ‘SRL National’ are California’s Larry Collins and Brian Olsen and Florida’s Ricky Brooks. A professional, no non-sense style has worked for the SRL as they’ve built their reputation in the industry over the years.

“We’re not going to re-invent our approach. We’re going to continue to manage our events in a professional manner, with solid tech and race procedures that are fair to all the competitors.” stated Brooks. “It’s important to us to have good communication with the teams and create an atmosphere on race weekends that the teams enjoy being part of.”

For 2023, the ranking of drivers who compete in ‘SRL National’ events will be ranked by total money won at the events they compete in. Some of the marque events will pay more money, which typically draws more of the top teams, so drivers will be rewarded accordingly at those bigger events.

For additional information and updates on the 2023 SRL National Super Late Model Tour schedule go to www.srlsouthwesttour.com or https://www.facebook.com/srlnational. 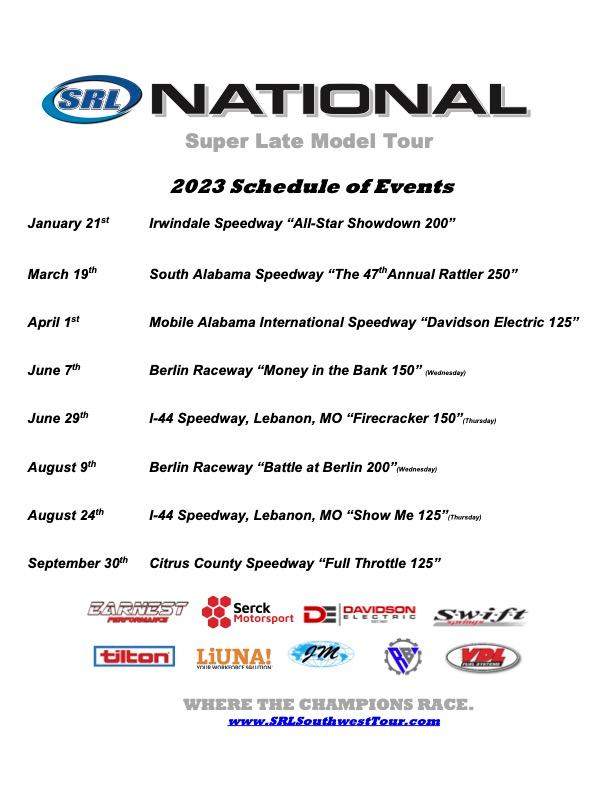