http://www.realracinusa.com/forums/attachment.php?attachmentid=20&stc=1&d=1190792247
eastbaybiker.jpg
Fans going to East Bay Raceway Park this coming Saturday night, September 29, will get something a little different. Yes, the late models, street stocks and other East Bay racing divisions will be putting on their usual brand of high octane competition. But add in a custom motorcycle beauty contest with over 50 cool bikes entered and you have the makings of a fall show to remember at the famous dirt track near Tampa.

Promoter Todd Hutto says fans will see “eight different classes of custom motorcycles, whether it’s a street bike or a custom chopper. We’ve promoted it through “Born to Ride Magazine” with their TV and magazine, we’ve been to several motorcycle shows in the last month just trying to promote this event, just to co-mingle the two, stock car racing and a motorcycle event on the same night.”

Florida in general and of course the west coast in particular is known for its contingent of motorcycle riders, custom bike builders. Much of the work of this talented group will be on full display beginning at 4 PM Saturday afternoon. Joining the bikes in the East Bay midway area will be a bevy of vendors, next door to the East Bay Raceway Cafe, a featured East Bay attraction in itself.

A panel of judges will make their decisions on the winning bikes and at intermission the fans will be treated to a parade down the front straightaway. The fans will then be able to be the final judge and pick the overall winner of the custom motorcycle show.

Todd Hutto is excited about East Bay Raceway Park…listen to this interview earlier this week (20 minutes).Click to Download and play!

“Born to Ride Magazine” will be taping and photographing for their weekly television show and magazine, so this may be a chance for some pretty fair publicity for some bikers, not to mention East Bay Raceway Park.

This will be the first custom bike show but East Bay has become familiar with the biking community this year. “We have been doing some motorcycle racing on the some of the off weeks, we have had some flat track motorcycle racing”, Hutto said. “In December we are going to put in it all together in one big event”, he added.

East Bay Raceway Park has been very active in the last two years in community outreach activities including a number of visits to schools in the surrounding counties.

Fans who have been paying attention the racing program this year at East Bay Raceway Park will be familiar with the large fields of late models. Last week 34 of these bad machines came to the “Clay by the Bay”. David Schmauss leads Jackie Nosbisch and Ryan Mitchell by 36 and 57 points in the chase for the coveted 2007 Late Model Championship. Amazingly, in Florida Super and Late Model racing on asphalt, 34 cars are hard to field for a major show, outside a few select special events each year. East Bay fans routinely see tough battles just to make the 24 car feature event.

When hosts on “Inside Florida Racing” joked with Hutto about “follow the leader” racing, he said (in reference to the late models), “yeah, there’s usually one on the bottom, two in the middle and one on top.” There is not too much short track racing more consistently exciting for fans than dirt late models. A driver can be in seventh on lap 9 and on lap 10 be fighting for the lead, keeping fans mesmerized with the on track action.

“We start our show a little bit early”, Hutto explained, “its around 6:30 when we go racing but typically by 10:30, no later than quarter to eleven we’re done.”

And Hutto stresses the importance of running a tight racing program, “We don’t play around, we get and there we rock and roll, put on a good show and send everybody home happy.”

Joining the Late Models this weekend will be the Open Wheel Modifieds, Street Stocks, Bombers and 4 cylinder racers.

Admission is the normal $12 for adults, seniors $10, kids 12 and under are free, 13-17 year olds get the student discount and pay only $7. Anyone arriving on a motorcycle can get in the gates for a $10 admission price.

East Bay Raceway Park is located in Gibsonton, Florida just off route 41 on 6311 Burts Rd. The speedway number is 813-677-7223 and for more information about the speedway visit the website at www.eastbayracewaypark.com 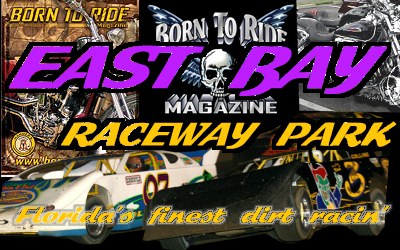