I just saw a great press release today, on the ASALMS website, about Ross Chastain and Jeremy Gerstner:

GMR Motorsports is looking forward to the 2009 season competing in the ASALMS South Division. GMR has been part of the ASALMS Series since 2007 and has finished in the top ten both seasons.

Jeremy Gerstner will pilot the number 70 machine for the complete ASALMS South Series for 2009, as well as competing in the Challenge Series for a few races. Jeremy finished out the 2008 season in 7th in points, and is looking forward to applying everything he has learned in the past to 2009.
Ross Chastain will drive the number 78 machine for the complete ASALMS South Series for 2009. Ross will compete for Rookie of the Year as well as finishing in the Top 5 in Series points. Ross Chastain is 16 years old. Ross is a sophomore at Riverdale High School in Ft. Myers, Florida. Ross works at J.D.I. Farms, the family watermelon farm, located on Highway 31 in Charlotte County, Florida. In 2007, Ross was the Fastruck ?FastKid? Champion and won his first feature in Fastruck as well. In 2008 he won the Fastruck Pro Championship, Fastruck Pro Six Pack Champion and Late Model Champion at the Charlotte County Motorsports Park.

Ross and Jeremy have both been busy in the off season preparing for the 2009 season. Jeremy and Ross both competed in the GMR Motorsports Late Models in 2008 with both cars finishing in the top ten. Jeremy has been racing during the off season, not finishing out of the top three and winning one race in open wheel modified and his crate late model so far this year. Ross has been racing during the off season as well with a win in his truck at Charlotte County Motorsports Park.

Ross is bringing a few sponsors on board with him for the 2009 season. The first sponsor is J.D.I. Farms, his family owned business that has been in operation since the 1800?s. The second sponsor for the 2009 season is Frederick Derr & Company, known for its expertise in heavy highway construction, site development, utility installation, coastal protection structures, and golf courses. Ross is hoping to make these sponsors proud in 2009. Please visit his sponsor?s websites: www.frederickderrcompany.com

Please visit the official website of GMR Motorsports for updates at www.jeremygerstner.com. You can also visit Ross?s website at www.rosschastain.com. 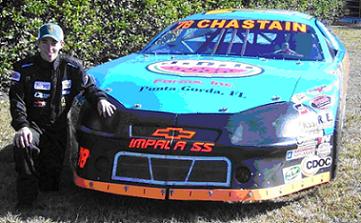 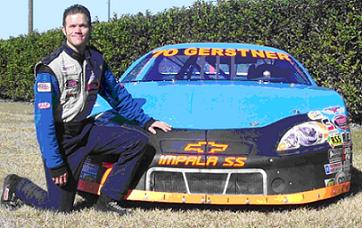 [SIZE=“4”]This is so cool to see the Teams from CCMP getting together to take on the ASA South Tour. Good luck and can’t wait to see their first Event on 3-14-09 at the Home Track!!! CCMP “The Late Model Capital of the SOUTH”.
Bobby Diehl[/SIZE]:huepfen024::huepfen024: