Let’s all celebrate the life of Jack Smith on July 6th. at Full Throttle Speedway .
Jack spent almost every waking hour promoting the sport of racing and the people who made that possible. He was passionate, sometimes just plain rude. But his heart and soul led him to be involved in meetings, photos, videos, web sites (this being one) radio shows and visits to homes, restaurants, fund raisers and many other things… He went to every track in Florida to try to help sometimes driving 5-6 hours over and back in the same day. He was an amazing man. If you were lucky enough to know him as a friend… well then you know this man deserves this special event. Show your thanks and friendship to Jack by attending the OWM race dedicated to him at FTS on July 6th!
Thank you! 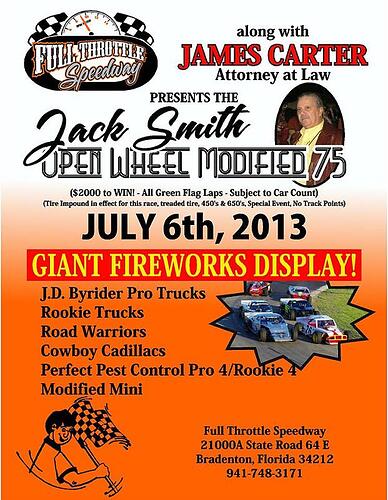 Cool, I’m going to see if I can make it.

GREAT… hope to see you there. if you’re in the pits come over and say hi. i will be in the first row. should be some great drivers attending.

I hope this doesn’t come off in an insensitive way, but here goes…

I see these ‘Memorial’ races as mainly a promotional tool… a way to make a buck off of someone else’s good name & reputation.

On the other hand, a BENEFIT race for the surviving family members is a highly commendable thing to do. There are several annual benefit races that I know of that directly benefit the FAMILY, not the TRACK.

I would hope there is something in place (or maybe still time to do it), where a certain percentage of the proceeds goes towards helping the Smith family.

That is an event I could stand behind, more than one that only benefits the track itself. It could be a win-win situation if handled correctly. Otherwise, I find it a bit sceeevy.

Keep in mind, this opinion has NOTHING to do with Jack or FTS. I see it happen all the time across the country… I just have a hard time getting behind the idea of who actually makes out in this deal.

I hope this doesn’t come off as a insensitive way but here it goes, what diff what they call it. I’ve been a part of the EBR race along with Jefferson since it started and we have always called it the memorial and we never made a dam dime off of it, it was always about helping the family and keeping the memory alive. I don’t really care what they call it, I will be there to support my old HIPPY BUDDY’S race and I hope a lot of yu others will come and support the event also, cuz WHEN IT IS ALL SAID AND DONE this is the man that gave us all this web site to come and bitch and moan, laugh and cry ,and I for one will be there to honor my old friend, NUFF SAID .I don’t no if they have a fast time award yet but I would like to sponsor that if at all possible say ,200.00 DOLLARS and lets just call it the JACK SMITH FAST TIME AWARD Thanks to everybody for there effofts.

I’ll be there Tony. Will be good to see you again. OSF is coming too. :huepfen024:
Not bringing the OWM though…
-JIM-

See you there TC your the man

Thank you for all you do for open wheel racing and to help honor a great friend of a lot of us.

Tony is always there when we need him. Thank you Tony!

Having second thoughts about bringing the MOD. Need to know a gear though. Built motor with 7200 chip…
-JIM-

[QUOTE=ocalasp76;129381]Having second thoughts about bringing the MOD. Need to know a gear though. Built motor with 7200 chip…
-JIM-[/QUOTE]

Jim, If you haven’t raced there, you gotta go. One of my favorites. I ran a 620 in my sportsman and truck(6.24 final) if that helps

Jim, If you haven’t raced there, you gotta go. One of my favorites. I ran a 620 in my sportsman and truck(6.24 final) if that helps

I too,dont want to come off as insensitive,but I feel this is a huge race for Full Throttle Speedway this saturday.This race can go a long way to establish FTS as a major track,not only in Florida,but across the country as well.

I was at FTS last saturday night for Anthony Campi’s win.Yes,the rain all day didnt help,but I was hoping for more than a 13 car field.(even though 3 didnt start in Fontaine,Maresca,and Dallenbach).The crowd was down,probably due to the weather,but man doesnt Williams have a !.8 million dollar note to pay off? He needs this race to be huge…

Sometimes I wonder if Kevin Williams doesnt rub people the wrong way.I was upset,personally,with him last year at Punta Gorda speedway.I have seen him get upset and angry with drivers,watching this from a distance.Wasnt my business,but it came off un-professional.

I was at a OWM race at PGS,that only had 5 cars in the feature race and that was THIS YEAR!!!So,I’m really hoping for a big turnout for this race to remember Jack Smith.I’[m sure the track would give some proceeds to the Smith family.So hope to see you there.

Oh,one last thing…Don’t you guys like Carol and Linda who help at the track,start sending me e-mails from Full Throttle instead of Punta Gorda speedway? Also,maybe have someone change or dress-up the signage around the track,or in the area so they all dont read DeSoto speedway.

Have a great 4th of July weekend. 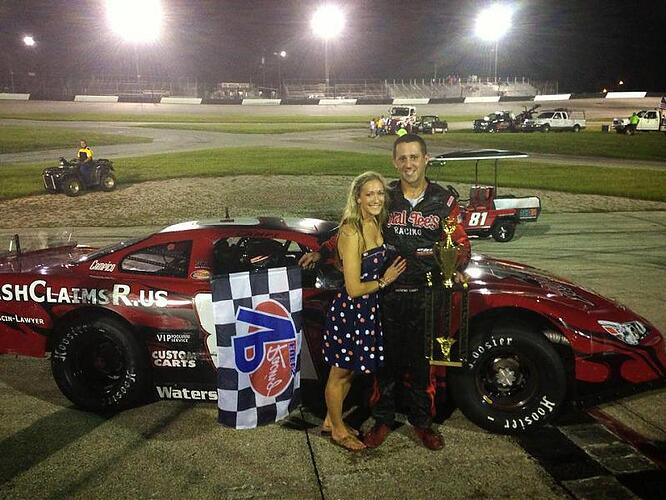 Thumbs up Free ! Free ! Free !
On July 6th, 2013 FULL THROTTLE SPEEDWAY will be celebrating the life of JACK SMITH… To start off the celebration there will be some fun things going on. Friday night there will be a FREE KW’s BBQ dinner complete with drinks for all the drivers and crews and friends who pay to get in the pits for practice! There will be a donation jar and that money will go to Kathy Smith, Jacks widow. It is a donation so only give if you want. There will be a 50/50 drawing and the proceeds will go to Kathy Smith.
Tony Carreno is donating $200 for fast time.
FREE tire for hard charger!
FREE five gallons of VP racing fuel for the Hard Luck Award.
FREE 5 gallons of VP fuel for Longest pull… (Driver who travels the furthest to the track).
FREE tire to the racer who is leading at the half way lap!
So grab your family and friends and join us in this special race for a special man.
THANK YOU !
OHHHH… $2,000.00 to win and good payouts following…!!!

These bonuses for this race only!!! FIREWORKS!!!

Tony… I think you mis-interpreted what I was saying. The way you guys do it is commendable, and the idea I was promoting. The Smith Family went through (I’m sure STILL going through) rough financial times with the loss of Jack.

That’s why I like to see things in ace that DIRECTLY BENEFIT the family of those who have a Memorial race in their honor.

Sadly, I think too many places feel its an easy way to line their own pockets on the heart strings of their fans and followers.

I’ve seen true “benefit” races where the employees all donated their time, sponsors kicked in, raffles held, and a majority of the racers turned their prize money directly back into the hands of the family.

This is where I see a difference between ‘Memorial’ and ‘Benefit’.

Hope you can see my point of view, and forgive me if you had taken what I said as anything personal towards ANYONE involved in this race.

AND… keep up the great work on the Eddie Brann Memorial. It’s very commendable, and I applaud your work…!!

I somehow got old! hahaha I dont do as much as i would love to to help Linda, Kevin, and Mike. Health is a problem. I do like to help in any way i can. i do not work for the track. everything i do is because i love our crew and just want to help. Are you Steve from Progressive? hate to think i missed you last week.
Kevin is passionate. he doesnt do this for $$$$. He does it because he LOVES this sport. He is trying to be in better control.

I am praying we have a decent amount of OWMs for Jacks race but i know these guys well and 4 cars or 24 cars they will put on a first rate show for the fans.
We havent been open long and have ALOT of major renovations etc. So please be patient and give us a chance to prove we are a track to be reckoned with!

Thank you for your comments.
Carol Wicks :auto003:

IT’S all good frass, That was just the whopp coming out after a long day, I no you and jack loved to agree to disagree, I feel that if anyone did a memorial race to scam off of some ones name is totally bogus but we all no it happens sometime, I hope you can make it down to FTS this week. Steady steve I AGREE with you I hope this race works out for everyone involved, but from what I’m hearing there’s going to be some pretty good cars making there way down for the show, I think a few of them are waiting to see how they make out thur night at showtime, It’s a dam shame that these to to tracks that are within 30 min of one another aren’t on the same tire but maybe one day they can get it figured out, well I just hope this dam rain lays off 4 days in a row is getting old,

What’s the cost on the pit pass for this race?? Don’t see it anywhere…
-JIM-

Last time we went down there it was 30.00 to get in the pits