The first points race for the Southern Pro Am Truck Series is Saturday, March 29th, 2014 at Bronson Speedway. The winner will receive $1,000 guaranteed. Bronson Speedway is providing the Southern Pro Am Truck Series with a generous purse incentive. The purse will increase based on the number of pro truck drivers, crew, family and friends that come through the pit gate to support the pro truck drivers and series. 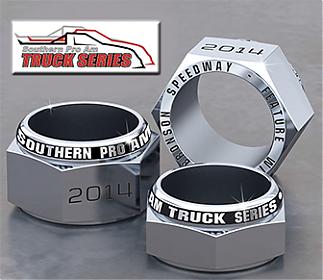 I gotta say, that’s a pretty cool idea for a ring.