And he was legal. 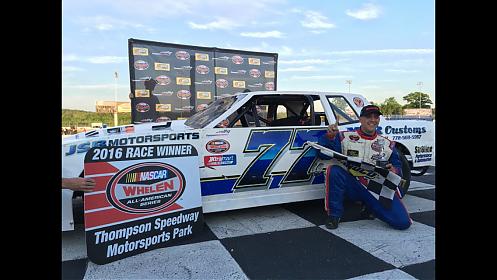 I dig the graphics on the car.

ps–Look, he is saying “Florida Racing is Number One” in victory lane! What a nice gesture!

Awe, I miss him. Congrats Philthy!

Thanks everyone! It’s surreal. 7th start at Thompson in my own car. Pretty crazy. It’s been a battle but it’s worth it now.

No OS, no video. Plenty of pictures though. I’ll have to post them up or you can go to my fb page. www.facebook.com/philjacquesracing

Me… missed? Here!? Wow lol Never know. Maybe I’ll come back and tell you guys how it should be done again lmfao

YES come back, you’ll fit right in here don’t you see? Dead since you and Scottso left.

Congrats on the win Phil !

Proof, the time spent working on a race car is more rewarding than wasting time with white trash knuckleheaded Florida crackers on the internet. LOL !

Is Albee still locked up in the nuthouse ?

No idea where Albee is. Honestly I haven’t even looked at this site in months lol While I miss the banter, I have a house, girlfriend and racecar that I would rather focus on. I might pop on once in a while.

Congrats on the win

Thanks guys! Much appreciated and very humbling. This has been a dream come true. Never truly thought I would get to this point but I have some amazing people behind me, including Patrick Thomas, Aaron Williamson and Scott Garrity. It’s a true North/South team effort. Pretty cool to have so many awesome and successful people behind me. Can’t thank them enough.

I am going to shamelessly ask that you guys go here to vote if you can. It would be a big help. I’m on a pretty tough budget and it’s been a rough year until this point. Every bit helps!

You seem to have the vote under control.

ps–I now feel like a democrat…(do I get a free phone or pit pass or something?)

You seem to have the vote under control.

ps–I now feel like a democrat…(do I get a free phone or pit pass or something?)[/QUOTE]

Thanks buddy. Not over until it’s over. Unfortunately, I’ve watched these things swing 100 votes in the last 24 hours before. Legal? Who knows… There are ways to buck the system. I’m only interested in getting an honest vote. Not rigging up a computer to auto vote.

Honestly, I am shocked I have this big of a gap. I am literally a nobody compared to those guys I am against. Pretty humbling.

By the way, I’m still just Phil. There are guys on this forum that have won more races than I probably ever will. No need to give me a title.

A couple of my favorite shots from the night for you OS since you probably dont have Facebook and I didn’t take any video for you.

The car looks flat and hooked.

The trophy is very cool.

Tight in loose off. Still got some work to do. I’d say we are about 85% right now. Driver is probably holding us back a bit too.