Top Florida sprint car driver Dave Steele was killed in a first lap crash at Desoto Speedway, a track that Steele had long history with many victories. More information as it comes in. 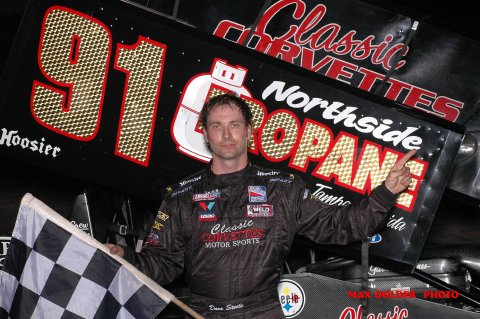 Man, I saw the video and I know he has walked away from much worse looking crashes. Did his helmet hit the wall or something?

Looks like he’s going to get out pissed that he wrecked. I want to know if he was wearing some kind of head restraint device. Thoughts and prayers to the family

God bless him and his family.

This is horrible . Please if someone finds out what happen let us know. did he have HANS device and all the safety gear .video didn’t look like it was that bad still can’t believe this has happen .

Nascar’s prerace just made mention of this. Thoughts and prayers go out to family and friends.

We’re is the video of the accident ? Did tires touch ?

Just did. RIP Dave and prayers to the family.

Thanks for the memories Superman!

Dave did not use either he felt it strained his movement to much, I hope the series will now make it mandatory. A very sad way to learn from this. Rest in peace Dave.

A sad deal indeed. He was one of those guys that, even if you were not familiar with the field, when you heard “Dave Steele” announced, you could always count on to put on a good show. He was one of the guys to watch, for sure.

As Jocko said, may God Bless Dave and his family.

He was far more likely to have won that event than to have had this unfortunate outcome. One never knows. If you haven’t yet signed up for “The Big Circle Track in the Sky”, this is as good a reminder as any that time may be shorter than one thinks.

Here is a pretty good article on Mr. Steele:

I watched Dave Steele race for many years in Florida, and closely followed his career away from Florida. I don’t remember ever going to an asphalt sprint car show that he was entered in, that he wasn’t the automatic favorite to win.
It’s very sad day for sprint car racing, and for racing everywhere. The one and only possible upside to this tragedy is that a definitive reason for his death can hopefully be identified, and changes or improvements can be made to insure it doesn’t happen to another driver.

This is the official article from USAC on the passing of Dave Steele written by Richie Murray of USAC Media:

Dave Steele, a two-time USAC Silver Crown champion and one of the United States Auto Club’s most accomplished drivers during the 1990s and 2000s, died Saturday night, March 25 after a crash on the opening lap of a Southern Sprint Car Shootout Series-sanctioned event at Bradenton, Florida’s Desoto Speedway. He was 42 years old.

Steele ranks 14th on USAC’s national win list with 60 victories between 1996 and 2007. The Tampa, Florida native was dominant on the pavement tracks, which accounted for all 60 of his USAC National wins. Despite only competing in half the races, or less, on the schedule throughout most of his career, Steele’s win totals rank in the top echelon of USAC’s record book. His 16 Silver Crown wins are the third most all-time while his 26 Sprint Car victories rank 15th and his 18 Midget wins put him 35th on the list.

“It’s hard to put the loss of Dave Steele into words,” USAC series director Levi Jones stated. “He was a once-in-a-lifetime talent on the track, but even more impressive was the man, the dad and husband he was. Our thoughts and prayers go out to his family.”

In both 2004 and 2005, Steele ran the full USAC Silver Crown schedule and would reach the pinnacle of the sport by capturing back-to-back series titles. Steele was victorious in three consecutive Silver Crown races during the summer of 2005 at Virginia’s Richmond International Raceway, Colorado’s Pikes Peak International Raceway and the Milwaukee Mile in Wisconsin. To this day, he is the last driver to accomplish that feat in a single season.

Steele burst onto the national scene when he relocated to the Midwest prior to the start of the 1996 season where he became an instant success. His first USAC National Sprint Car start at Lakeside Speedway in Kansas City, Kansas resulted in a complete sweep of the night’s program after posting the fastest qualifying time, winning his heat and leading the final 14 laps to take his first career USAC victory.

From that point forward, Steele gained a reputation as the man to beat on the pavement. He won a staggering 12 USAC features at Indianapolis Raceway Park (1 Silver Crown, 6 Sprint, 4 Midget and 1 Midget special event) during his career. His first USAC National Midget win came during the “Night Before the 500” at the .686-mile oval in 1998. In 2002, Steele put on one of the most memorable performances in USAC history when he won two National Midget features in one night at IRP. After winning the first feature, Steele started the second event from the 22nd position. Quickly cutting his way through the field, Steele took the lead by lap 12 and, by the end of the 25-lap feature, was $50,000 richer. He remains the most recent driver to win two USAC National Midget points races in a single day.

Steele stands behind only Jack Hewitt and Brian Tyler on the USAC Silver Crown career win list. Yet, no driver has led more laps or owns more pavement wins (16) in the series than does Steele. The first of which came in the grand opening at the Memphis (Tenn.) Motorsports Park in 1998, but it was the tricky one-mile Phoenix International Raceway that became Steele’s personal ATM. Miraculously, he captured the Silver Crown portion of the “Copper World Classic” five consecutive years from 2002 to 2006! In addition, Steele scored a “Copper World” Midget feature victory in 2002, 2006 and 2007.

The accolades for Steele within USAC are nearly endless. He was a two-time winner of the “Turkey Night Grand Prix” at Irwindale (Calif.) Speedway in 2001 and 2003. He was a force on the Indiana high banks, winning eight Sprint features at Winchester Speedway and three times at Salem Speedway. He captured three Silver Crown races at Richmond, Va. in a four-year span between 2002 and 2005.

Steele was a three-time Tampa Bay Area Racing Association Sprint Car champ in 2005, 2009 and 2013. He also made his way into other racing avenues with the Indy Racing League, where he made three starts in 1998, as well as NASCAR’s Busch Grand National Series (now Xfinity Series) in which he made a pair of starts during the 2000 season.

Here is an update for Dave’s funeral arrangements…

Of course the wishes of the grieving family are paramount.

Do we know if the family is welcoming guests or seeking privacy?

I would think public would be welcome this was posted on Facebook for all to see.

anything on how to donate straight to the family?
I want them to get all of the donation.

Loved watching Superman drive by the field to many victories

my chance to give back and help the his little ones

[QUOTE=Pun33;174177]anything on how to donate straight to the family?
I want them to get all of the donation.

Loved watching Superman drive by the field to many victories

You put cash in an envelope and give it to them.