Sprint Cars returned to Auburndale Speedway for the first time since 2014 and did not disappoint the fans who watched some unbelievable racing all night and eight youngsters left the speedway with brand-new bicycles donated by long-time race fans David and Martin Stubbs.

Eighteen Southern Sprint Car Shootout Series (SSSS) teams made the trip to the track and were split into a pair of heat races. Two of the younger racers made their presence felt in the heats as Dylan Reynolds picked up his first career Sprint Car win in heat one while Clayton Donaldson dominated the second heat and looked to have one of the fastest cars in the field. Defending SSSS champion John Inman had problems with his Max Steele Autocraft machine in hot laps and switched to Phil Haddad’s #42 for the racing action.

The 40-lap feature run had Donaldson on the pole flanked by Inman with Reynolds and Gary Wiggins making up row two. Point leader Mickey Kempgens had the ninth starting slot.

Donaldson stormed out to a quick lead only to see the caution out by the end of lap one as Tommy Nichols ended up facing traffic in turn one after a wild mix-up coming down the front stretch. The restart saw Donaldson get a huge advantage off turn four but the green was quickly replaced by the yellow as Ray Bragg took a wild trip through the infield going into turn one, nearly collecting the light pole. Bragg tried to return but his car was not to his liking and he pulled off the track. Meanwhile, SSSS officials determined that Donaldson had jumped the restart and he was sent to the rear of the field for the restart.

Inman snared the top spot on the restart as Johnny Gilbertson zipped into second place and the pair began a great battle for the lead, nearly taking each other out coming off turn four while completing lap ten. Both drivers entered lapped traffic on lap 12 and that proved tough for Gilbertson as he got bottled in allowing Inman to move out to a big advantage.

As the race continued under green all eyes were on Shane Butler. Butler, whose car had not been all that good during practice and his heat race, suddenly caught fire. After starting 13th, Butler took over the third spot on lap 22 although he was quite a distance behind the leaders. That all changed on lap 25 when Reynolds went for a spin off turn two to bring out the caution.

The restart totally changed the complexion of the race. As Inman came off turn four his car got extremely loose sending the field scrambling as they managed to avoid a major altercation. Butler used that to his advantage to grab the point as Inman finally corralled his “bucking bronco” and settled into the fifth spot.

Butler was on rails as he quickly opened up a big advantage on Gilbertson and third-running Scotty Adema before the final caution of the event flew on lap 31 for a spinning Tony Agin in turn four.

Butler checked out on the restart and sped to an easy victory while the final lap provided plenty of action behind him. Adema made a big move on Gilbertson and snagged the runner-up spot during the white flag lap. Coming to the checker, sixth-running Sport Allen got loose off turn four and was hit by Tommy Nichols sending Allen spinning to the infield in a cloud of smoke as Nichols gathered up his car and was able to finish the race.

The final order saw Butler the winner trailed by Adema and Gilbertson. Kempgens drove a steady race to claim fourth while Inman held strong in fifth. University of Florida student Carlie Yent, making her first start of the year, drove up to sixth after starting 11th. Yent had earlier won an extra $100 from the SSSS as her car was voted “best appearing” by the fans during intermission. Reynolds rebounded from his spin to claim the seventh spot ahead of Rex “Boneman” Hollinger. Nichols wound up ninth while Allen was scored tenth as the last car on the lead lap although he was sitting in the infield.

“I can’t thank these guys that work on this car enough,” said Butler in victory lane. “We were pretty good in practice last night but the car just wasn’t what it should be earlier today and in the heat. These guys just went work and thrashed on the thing and it was amazing the speed we had in the feature. This team just never gave up,” he continued after taking the checkered flag and poking a hole in the wing of the car to display the flag in victory circle.

Adema was pleased with his second place effort. “What a fun race track this place is… anybody who said Sprint Cars can’t pass or put on a good show at Auburndale Speedway should have been here tonight,” said Adema.

For Butler it was his second SSSS win of the year as he won previously on February 10th at New Smyrna Speedway.

The Florida Midget Racing Association TQ Midgets were in action and there were some interesting happenings that took place. Jimmy Wilkins III ran over a wheel of Stu Chamberlain’s car going into turn one at the start of the heat race and tumbled hard on his side sliding up to the wall. After he gathered up his senses, Wilkins got out of the car and tipped it back over on all fours just as the track emergency crew arrived. Wilkins climbed back in the car, fired it up, rejoined the field, then went on to win the heat!
Unfortunately the damage to Chamberlain’s car forced him to the sidelines for the rest of the night. Steven Hollinger was making his first-ever start in a TQ Midget but saw his evening also end during the heat as the clutch broke.

Mike Nelson grabbed the early lead in the feature and a great race ensued from that point as Nelson was doing a fine job holding off Rob Kohler and Wilkins until Kohler tried an inside move and spun himself out during the eighth lap. Nelson held sway for a lap before Wilkins zoomed by and drove off to an easy win. Nelson held off the hard-charging Kohler for second with Dalton Baldwin fourth and Al Seitz taking fifth.

The Daytona Antique Auto Racing Association (DAARA) was out in force once again at Auburndale. The Sprint Car action was literally dominated by Robert Campbell as he easily won his heat then scored a big win in the feature as well. Stan Butler, 65-year-old father of SSSS winner Shane Butler, charged up to second late in the race but was too far behind Campbell and settled for second in a car he once drove at the “Little 500” in Anderson, IN. Bob Wolpert claimed the third spot ahead of Roy Campbell and Merle Strickland. Charlie Dean was sixth ahead of second heat winner Louis Brashear and Dave Cash. Darren Nichols, Jimmy Mittner and Chris Hahn were unable to start the feature.

The second DAARA Stock Car feature saw heat winner Cory Lane place his Chevy Cavalier NASCAR Tour Modified on the point until he spun on lap four coming off turn two. Cush Revette, Jr. then took over in his '57 Chevy convertible as he held off Frank Lenhardt for the win only to see the pair tangle up with the lapped car of Scott Hatton after the race was over! Unfortunately all three cars had to be towed from the Speedway.

Danny Burchfield grabbed the lead from Brian Harbin on lap four then drove his Saturn station wagon to victory in the Scrambler feature despite constant pressure from Keith Cantrill who had to settle for second spot. Kelly Hahn took third ahead of Harbin, Travis Todd, Danny Burchfield, Jr. and Fred Wilson. 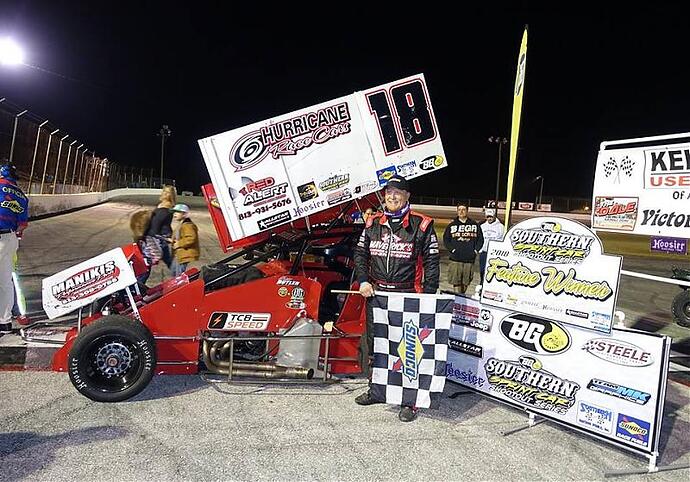 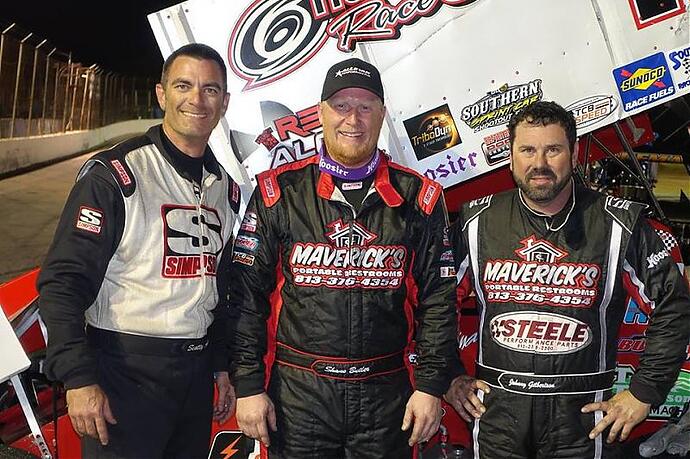 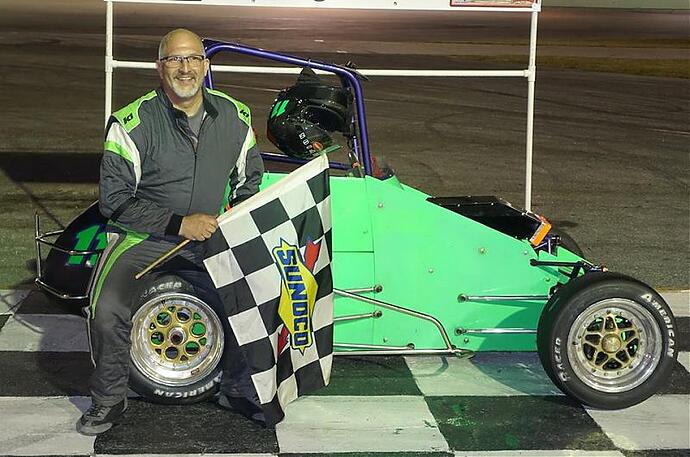